Our first thought when we saw “The Firebreather,” the hero car Classic Design Concepts built for Exxodus Pictures’ new sci-fi flick Jinn, was “modern interpretation of a Firebird… cool!” The reality is it’s much better… and much faster. This car is designed, engineered and manufactured to be entirely new breed of sports car, melding Hollywood style and American muscle. 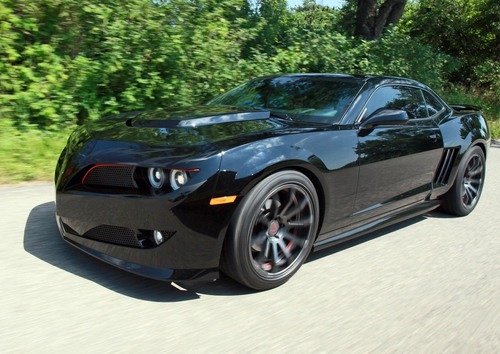 Throughout its entire life, the Firebird was the upscale Camaro, with arguably better styling, slicker interiors and more options. Along the way there had been unique engines available like the awesome 455 and the surprisingly-competent-for-the-80’s Buick V6 in the Turbo T/A, but for the most part it was a re-hash of Camaro wearing a different cut of leather pants. That was what we were expecting when we slid into the custom Alea leather seats of the Firebreather. It’s certainly not what we found.

The Firebreather has come to life in a unique way, the impetus and design come from Exxodus Pictures, a Michigan-based film studio, brought here in large part because of the generous tax credit afforded films shot in the state and because the people behind it are natives. Firebreather is loosely based on the Firebird and is the hero car for their film Jinn, which recently wrapped up shooting around the metro-Detroit area. As a way to build buzz and recover some of the costs, the producer, Ajmal Ahmad and his associates partnered with Classic Designs in Novi, Michigan to develop a line of products and custom cars based on their movie car. This would normally be a little far fetched, but Pontiac Firebird fans seem to love anything that can keep their fantasy car alive after the brand took a dirt nap.

There will only be 50 Signature Series Firebreathers built, exact replicas of the movie car, right down to the electroluminescent eyebrows necessitating an off-road-only use waiver from each buyer. There will also be non-Signature cars built a la carte from whatever version Camaro and catalog accessories you want. The cars will be produced by Classic Designs, a company well known for its attention to detail and work. While they’re finishing up tooling for wheel center caps, the steering wheel badge and the Firebreather logo, we managed to finagle some exclusive seat time with their prototype Signature car and like the mischievous spirits the movie Jinn implies, this car grants wishes but doesn’t pull any punches.

What Firebreather can be likened to when compared to a Camaro is like the difference between a base Corvette and the ZR1. Yes, the styling is different — the stock Camaro’s been transformed into an homage but not outright interpretation of the Firebird, complete with the twin binnacle grille, shaker-style hood, strong graphics, complex wheels and a sinister look. More importantly for the Corvette comparison though is the power.

How do you take a 2SS package Camaro and mine another 174 HP from a 6.2-liter V8? A big fat supercharger. Enter the Edlebrock E-Force Supercharger Kit, specially modified for this application. Think of it as the aftermarket version of the ZR1 supercharger. It’s a packing a 2.3-liter Eaton four-lobe roots supercharger with an integrated air-to-water intercooler which will be finished off with a custom plate with the “Jinn” movie logo present on the nose of the car. The supercharger is paired to an exclusive cold-air intake system and JBA 3″ cat back exhaust along with a proprietary tune from Classic Design Concepts. The result is some serious, eye-opening power. 529 HP at 6400 rpm and 493 lb-ft at 4200 rpm as measured at the wheels according an independent dyno, putting crank power somewhere in the neighborhood of 600 HP.

The stock transmission is still in place, although it’s been upgraded with a tight, Hurst shifter. The suspension has been stiffened up significantly though it retains the standard dampers for very limited ride comfort, the springs and anti roll bars have been replaced with an Eibach Pro-Kit. This ain’t Granny’s Camaro, it’ll punish you for traversing rough pavement. The punishment is rewarded though with a completely different feeling car.

Handling is the place where the comparison between a 600-ish horsepower supercharged-intercooled V8-powered Camaro to the ZR1 sort of falls apart. The ZR1 is a special beast, it transcends the realms of the possible and pushes you into the impossible, places the average non-racecar-driver mind isn’t ready to go. The Firebreather does not, but that isn’t necessarily a bad thing.

The Firebreather is turn-it-up-to-eleven garage rock compared to the ZR1’s carefully crafted Symphony of Destruction. It’s still fun, but a different kind, one that’s far more approachable to the average metalhead. Mash the gas and you are greeted with a building wail of ferocity from the supercharger and the traction control aches for more friction. It’s fast, real fast. But it’s also not quite sophisticated enough to keep up with all the power. This is a good thing as long as you aren’t an idiot.

The sight lines bestowed on the car by the Camaro heritage are terrible, but the car somehow shrinks at speed, the tightly controlled body motion helps you forget it’s nearly 16 feet long and over six feet wide. The fat Pirelli’s on Axis wheels deliver mountain-climber’s grip but their width makes the car wander through asphalt depressions at low speed. It feels much more nimble in this raucous form, even as its suspension beats your liver into a soupy, iron-rich goo.

Hammering on the car you get the feeling you might break before it does, you’re just there for the ride and all you can hope to do is survive. It’s exhilarating. It’s exhausting. It’s what the Firebird never was but should have always been.

These high-power examples will retail for around $85k, a pretty penny for a tuner Camaro, but that’s not really what Firebreather is. It’s a flight of fancy into an alternate reality where Pontiac still lives, the Zeta platform doesn’t handle like a stuffed pig, and you can still get the healthy adrenaline rush from dancing with a car you know could behave very badly.