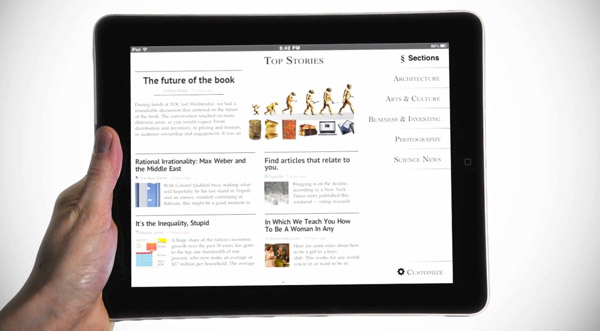 Zite is a personalized magazine that’s being touted as a ‘Flipboard-killer‘ because of its learning capabilities. Unlike iPad publications like Das Tägliche or Sir Richard Branson’s ‘Project,’ Zite mixes the links from your friends’ Twitter accounts and your Google Reader subscriptions with the voting and customization ideas from services like Pandora.Apps like Reeder, Flipboard und Pulse require that you bring in your own subscriptions in the form of Tweets, RSS feeds oder Facebook Freunde. Zite claims that its recommendation system, developed by the University of British Columbia’s Laboratory for Computational Intelligence, is even smarter. Zite starts with your basic preferences and then customizes to your interests (long-form journalism, celebrity news, cats) by analyzing how you read and rate articles. Let’s dig in to see how it fares.

Fortunately, setup is easy enough. Give Zite access to your Google Reader account or Twitter username or bypass Twitter und Google Reader altogether and simply select from Zite’s pre-selected Magazine Sections which features listings on everything from World News und Wissenschaft zu Mac und Travel Blogs. These sections are your primary organizing tool, and you’ll find them on the right side of the app’s home screen. Interestingly, CEO Ali Davar told All Things D that Facebook’s data is too heterogeneous to reliably recommend articles.“We’ll need to use the app for a few days to get a better feel for how good the recommendation engine is, but we expect many will be turned off in just a few minutes by the app’s crushing speed issues.” Though possibly due to testing on the morning of the launch, Zite was all but unusable, burdened by 15-minute login screen load time and excruciatingly slow article and section refreshes (all on fast W-lan).

Zite unique from other news readers is that it learns from what you read. From the kind of stories you click or favorite or rate u, and the stories you avoid and rate down – everything you do will affect what Zite thinks you might or might not want to read. From your behavior towards the different articles, Zite learns from it and shows you the news it thinks that you would like and doesn’t load what it thinks you don’t. It’s a very interesting program that’s said to get better with time, making it an intelligent magazine app. The app is available now for free on the Apple App Store.

The app’s suburban jewelry-dealer aesthetic is harmless enough, but the design issues are more than just cosmetic. To simply share an article in portrait mode, you’re forced to tap ‘web’ (wait), then the ‘share’ button (wait) and finally you’re only given a few sharing options. Flipboard, Pulse, Reeder und sogar Twitter offer one-tap sharing, Instapapier und ReaditLater Optionen. Zite takes the Instapaper approach and visually tweaks articles by stripping out ads, site layouts and formatting for easier reading. But again, it’s a slow process.There’s clearly a need for tools like Flipboard und Zite for helping to organize and visually highlight what’s important in our ever-expanding digital streams. Applying the Pandora voting model to other media is a novel approach, but Zite won’t be replacing any of our go-to news-reading apps until it gets its crippling speed issues sorted out.