Third-party video game accessory manufacturer Hyperkin has announced the upcoming launch of its PS3 Remotext,  which will be released in early June, includes a slide-out full QWERTY keypad as well as DVD/Blu-ray Control. It lets gamers text others on the Playstation Network or use its dual analog sticks and buttons to navigate PS3 games……….. 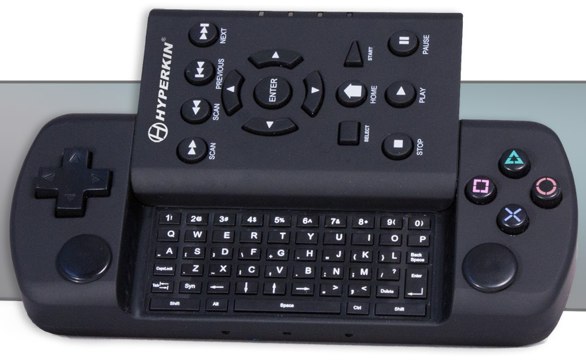 Hyperkin, a recognized and trusted brand of video game peripherals has announced the upcoming launch of the PS3 Remotext. Das PS3 Remotext, which will be launched at E3 in June, includes a full QWERTY keypad und DVD/Blu-ray Control. Das Remotext enables you to text other players on the Playstation-Netzwerk, or use its dual analog sticks and buttons to navigate PS3-Spiele. Das PS3 Remotext allows you to easily control the playback of Blu-Ray movies, DVDs, CDs and media streams on the PS3 system. It also features a slide out QWERTY keypad that enables you to text other players on the Playstation-Netzwerk or you can use its dual analog sticks and buttons to play PS3-Spiele. Simply attach the included USB receiver to an open port on the PS3 system and you can control your PS3 system with ease. “The PS3 Remotext is a great solution for texting and watching movies,” states Steven Mar, Hyperkin’s Business Director. “It has everything you need to access all of the PS3’s major functions, providing an easy-to-use way to control and enjoy the system.” Mar continued: “We are eager to exhibit this and our other line up of new products at E3 and anticipate an enthusiastic response from the media, retailers and consumers.”