Did you ever think about a wrist watch that tells the time while race? Well, it seems, Absurd, but the extraordinary idea captivates the viewers at the first glance itself. The versatility of the concept is each part (Hours, Minutes, Seconds) of the watch has racing vibrations which not only seems a race but also gives you the exact time. The typical but cool and unconventional style based wrist watch has designed by UK based designer, Peter.

No doubt, the sport of racing is the inspiration behind Peter’s fantastic concept. With the combination of Race Track and Wrist watch, his peculiar concept shows time in an unconventional style, but in a recognizable way. Here, he has used three basic colors: Red, Blue and Green to represent the Hours, Minutes and Seconds, respectively. 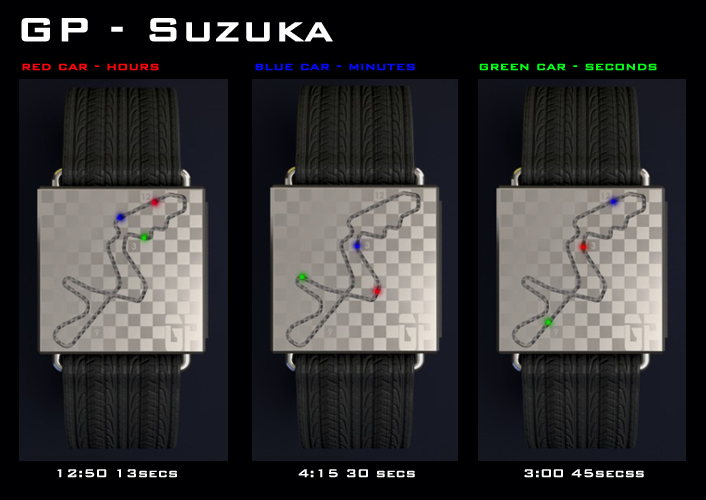 The GP race track’s circuit as the Timer is the highlight of this concept. The silhouette of the circuit forms essentially a analogue face, ‘Cars’ travel around the circuit clockwise to tell the time. The watch’s display has a Checkerboard design in its background, while the circuit will be the foreground. The individual colors (Red, Blue and Green) show the time according to their positions on the circuit. No need to say, numbers are denoted on the sides of the circuit for easy recognition. The hours will be displayed in intervals of three. It means, you’ll get etched number at the 3, 6, 9 and 12 o’clock positions. As the ‘Green car’ acts as the seconds hand, it races around the “track” with the other two, constantly.

The facia of this Wrist Watch is removable and can be swapped with a range of facias with different circuits on them as per user’s wish. The watch is programmed to work with a range of these facias too. The straps of the concept of this Wrist Watch have a Tire’s design with lines and treads. The watch is totally based on LED technology. At first it might be difficult to read the time, but, it will be ease to handle while being friendly as soon as the users adapt them.

Well, let’s hope that this astonishing concept and designs will attract Kids and specially the Moto Racing fans.