NextGamez announced Mr. Pig Muddy 1.0 an addictive physics-based game for iPhone,iPad and iPod touch.In this game Mr pig is not intelligent and u have to trained to do tricks and get him bathing……. 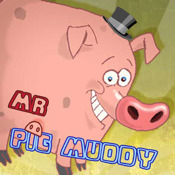 Dutch game development studio NextGamez announced Mr Pig Muddy 1.0 an addictive physics-based game for iPhone, iPad and iPod touch devices. While pigs are very intelligent and can be trained to do tricks and such, Mr pig muddy is not fond of bathing. Your goal is to get him bathing. Each of the 30 levels requires logic, skills. Mr Pig Muddy features hours of gameplay, challenging physics-based farm settings, demolition of hay bales, construction and many special features and objects.Invite someone to join, then get a game going. Or go up against people you don’t know, from anywhere in the world, in a multiplayer game. It’s your world. Everyone else is just playing in it.Score some bragging rights. Take a look at leaderboards and see how your score ranks against your friends, as well as all players of each game. You can also compare game achievements with your friends. Check out leaderboards and achievements through the Game Center app and through each individual game.
Spielfunktionen:

Mr Pig Muddy 1.0 is only $0.99 USD (or equivalent amount in other currencies) and available worldwide exclusively through the Appstore in the Games category.