AT&T and Motorola has showed off a new Android phone that connects to a docking station that looks like a laptop but has no CPU, so that users can access a full physical keyboard and monitor.The Atrix 4G has some impressive specs.

According to Motorola CEO Sanjay Jha, it’s an Android 2.2 smartphone with a dual-core 1 Ghz processor, 1GB of RAM, 16GB of storage, a “qHD” display, a fingerprint recognizer and a huge 1930 mAh battery, all in a 10.9mm-thick case.

The Atrix will connect to AT&T’s HSPA+ “4G” network, AT&T said.But by far the neatest feature is the Atrix’s docking ability. Jha showed the Atrix docking into the “Motorola Lapdock,” a brainless 11.6-inch, 2.4-lb magnesium alloy laptop which uses a special “Webtop” app to provide a full screen, keyboard, speakers, and 2 USB ports for the Atrix’s abilities. The dock has 8 hours of battery life. 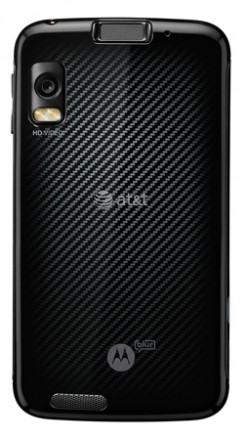 In addition to the battery powered laptop dock, we also have an HD dock, which can hook up to an HD monitor, a mouse, and a keyboard. The Atrix IS the brain – all you need are the peripherals. In fact, it’s so powerful, the Webtop app actually contains a full desktop version of Firefox, really blurring the lines between desktops, notebooks, and mobile. 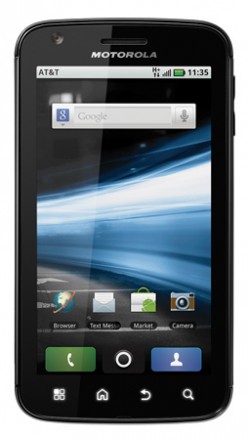 With all those specs and features mentioned the crazy thing is that’s not even the coolest thing about the smartphone. A Vehicle Dock will be offered in addition to a HD Multimedia Dock which will allow consumers to connect their smartphone to an HD television to watch videos thanks to its HDMI 720p output. The jaw dropper accessory though has to be the Laptop Dock which turns the ATRIX 4G into a netbook thanks to the included Webtop application along with the dock’s display, QWERTY keyboard and mouse. The fact that the smartphone supports HTML5 is a bonus for the netbook feel.

The Motorola ATRIX 4G is expected to be launched by AT&T sometime during the first quarter.