Microsoft has confirmed that it has pushed “an early build of a future update” to Windows Phone 7 to “a small number of developers” that adds, among other things, copy and paste. And there’s purported video of that function in action.If the reports are accurate, then it seems that the earlier rumors of the WP7 update being “massive” are inaccurate, since this update doesn’t seem to offer much more than the ability to copy/paste. 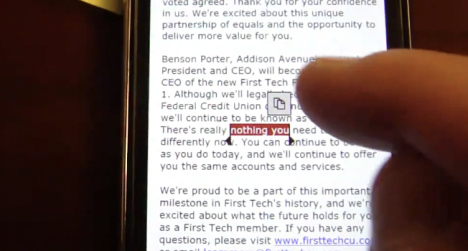 The updates have gone to users of the Samsung Taylor, a Windows Phone 7 test device that went out to developers and reviewers before Microsoft released the new mobile operating system on Nov. 8 (Oct. 21 in Europe and Asia-Pacific). Microsoft is working on a sizable update that adds copy and paste, and possibly multitasking, turn-by-turn navigation and Windows Live SkyDrive support. A custom-ringtone app also is rumored to be in the pipeline.

The update is rumored for January, but the official Microsoft line is “early 2011.” A Microsoft spokesperson said there are no general updates being distributed “at this time.” Microsoft also sent seattlepi.com the following statement:

Microsoft is committed to delivering regular updates to the Windows Phone experience. Our first update will make copy and paste available in early 2011. In addition to this first update, all Windows Phone 7 users should expect to see additional updates delivered in the future as part of Microsoft’s ongoing update process.