AT&T expands Windows Phone leadership plans to introduce three new 4G Windows Phones (HTC Titan, Samsung Focus S and Focus Flash) in fourth quarter and update all existing Windows Phones. The Focus S will have a 4.3-inch Super AMOLED Plus display, 1.4GHz CPU and an 8 megapixel rear camera that accompanies a 1.3 megapixel front-facing cam for video chat and bearing Mango is the Samsung Focus Flash, considered the lower-end offering by Sammy, which still brandishes a 3.7-inch Super AMOLED screen as well as a 1.4GHz CPU and 5 megapixel rear shooter and front-facing camera that for now has no specified resolution………… 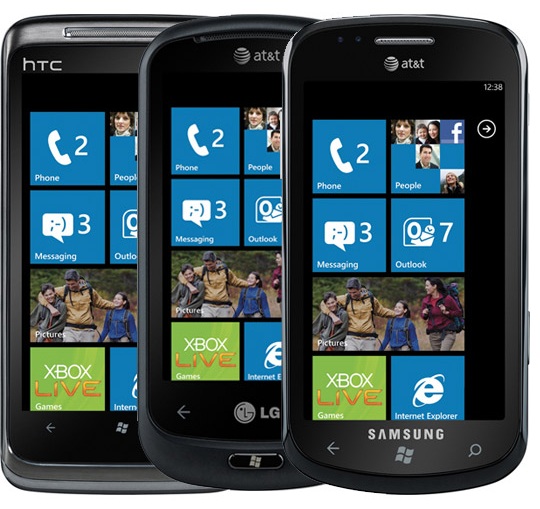 Designed to hit the market packed with value, Samsung Focus Flash‘s 3.7-inch Super AMOLED screen will both fit in pockets and be light on pocketbooks with the full power of Windows Phone 7.5 inside. As fast and lightweight as it is compact, it runs a 1.4 GHz processor and a 5-megapixel camera plus front facing camera. AT & T. will be among the first to offer the Windows Phone Mango update to its leading portfolio of Windows Phones this fall. Current Windows Phones von AT & T. einschließen:

With its unique user interface complete with colorful Live Tiles, the next version of Windows Phone, code-named Mango, puts people front and center making it easier to connect and share with friends, family and colleagues so important moments are never missed. Windows Phone has modern communication built in. Only Windows Phone hat ein People Hub with one touch access to Facebook, LinkedIn und Twitter, all built right in. You can group your friends, pin them to your Start screen to get live updates and easily text, email and IM them all at once. Windows Phone even has Facebook Chat, Messenger, check-ins and photo tagging all built-in so you can stay connected without missing a moment. Windows Phone has the apps you need but takes them a step further. Pin your apps to your Start screen for live updates at a glance. And only Windows Phone connects apps to your searches making them easier to discover and use. Windows Phone brings you the Internet beyond the browser. It delivers a fast, beautiful web experience with Internet Explorer 9 and hardware acceleration. Local Scout provides suggestions and prioritized local search results on restaurants, shopping and things to do so you can live like a local no matter where you are.