Barnes & Noble has just informed folks that they’ve released the SDK for the Barnes & Noble NOOKcolor for developers to create apps and developers can download the Android SDK add-on file named NOOK SDK 1.0…… 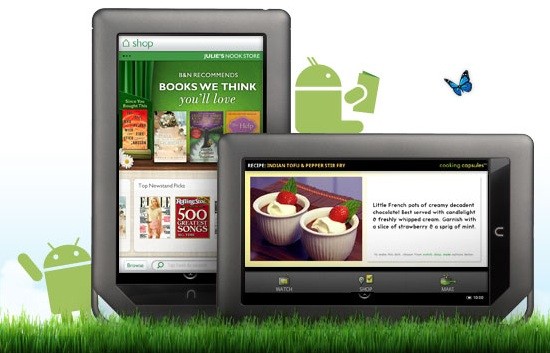 Das Nook Color is starting to make minor waves (in spite of my prejudice) as it’s really quite a lot of machine for $250. And now the SDK has been opened up, which should allow the usual suspects to adapt their existing Android apps to the Nook’s hardware.An “unofficial SDK” has been available for weeks, of course, in the form of many leisure hackers interested in the hardware (the latest developments are helpfully summarized here and of course on NookDevs). Once you sift the unique Barnes & Noble files and functionality from the basic Android 2.1 stuff, there’s only so much prodding that needs to be done before you can accurately document every file, hook, button, and custom action.

The specs include a mention of hardware scaling from 848×480 to 1024×600, a minor and non-aspect-matched stretch that can’t be good for readability; this was likely planned as a shortcut for developers who didn’t want to actually redo their pixel counts, menu images, and so on. It also suggests that limited access to “normal” apps is in the works, or that a few already populate the B & N. store. You’d probably be able to tell because of a less-clear look to some of the text and images.