Microsoft Oberfläche Tablets are hot. We don’t know about other media people, but Oprah Winfrey is in love with the Surface tablets. She has bought as many as twelve tablets for Christmas gift. The irony is, she has shared this information via Twitter using her iPad.

Früher in diesem Monat Oprah Winfrey called the Microsoft Surface tablet one of her “Favorite Things” of 2012. She said, “The Surface, Microsoft’s first tablet, feels like a Mercedes-Benz to me, people! The full-size keyboard built right into the cover makes work easy, the very smart kickstand makes watching a movie or Skyping a friend a delight, the less than a pound-and-a-half weight makes a great alternative to a laptop, and the many other features make it fun for work and play. Now, that’s a wowser!” 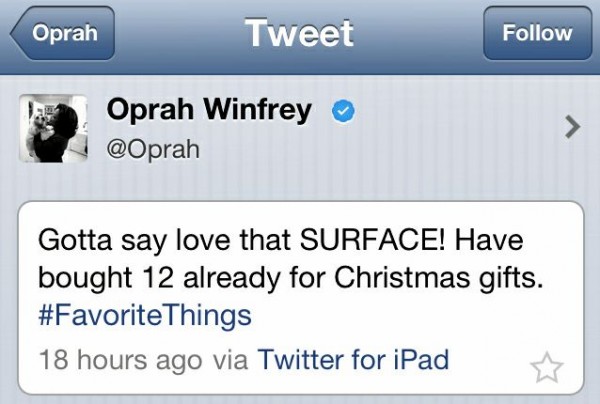 However, on November 18, the Surface tablets appeared in the televised “Oprah’s Favorite Things 2012“ two-hour special show. Later on the same day Oprah tweeted, “Gotta say love that SURFACE! Have bought 12 already for Christmas gifts.” But, if you look the image right above you will see that she used her iPad for tweeting this. And, there lies the irony.

However, her love for iPad is nothing new. Back in 2010, Oprah put the iPad on her “Ultimate Favorite Things 2010” list saying, “Words cannot describe what I feel for this magnificent device. I really think it’s the best invention of the century so far.”

[Tutorial] How To Add Additional Keyboards In iOS Devices

[Tutorial] How To Set Up Custom iOS Alerts For Email Accounts