Woow Digital revealed a slate of its own The One tablet with Tegra 2 and latest Google’s Android OS Andorid 2.3 Gingerbread coming in December for Christmas….. 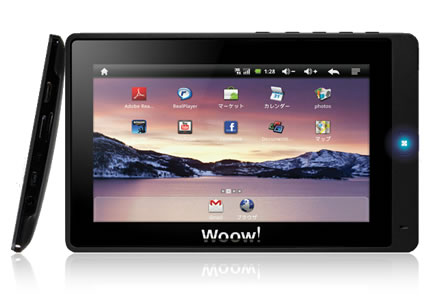 WooW has joined the fleet of companies to produce an Android-basiertes Tablet device with the announcement of the 10-inch WooW Digital The One Tablet ahead of a pre-Christmas launch.WooW Digital The One Tablet will be rolled out across Taiwan, Hong Kong and European markets in the near future packed with the upcoming Google’s mobile operating system Android Lebkuchen Version 2.3 .Packing an NVIDIA Tegra 2 processor with 1GB of RAM, 16GB of flash storage and 1024 x 600p resolution 10-inch display, WooW’s attempt at a tablet device is no slouch on the specs front with integrated Wi-Fi, Bluetooth and 3G credentials completing the connectivity front.Set to go on sale in Japan within the coming weeks priced 42,000 YEN (£319), the WooW Digital The One Tablet will be one of the first tablet devices to come preloaded with Google Android Gingerbread.