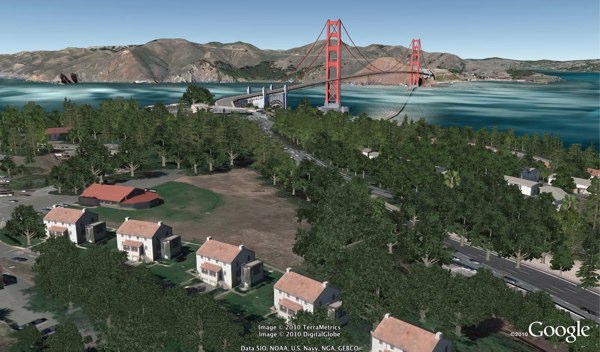 Google has announced the release of Google Earth 6. The latest version is available for Windows, OS X and Linux. The update that follows Google Earth 5.2 release earlier this year adds three major updates to the virtual geographical tool.The Google Maps Street View experience is now fully integrated into Google Earth. Pegman (the small guy that represents your Street View position) is now placed alongside the Google Earth navigation controls, where he launches Street View just like he does in Google Maps. Just pick up Pegman and drop him wherever you see a highlighted blue road to fly right down to the ground.

3D buildings has been there on Google Earth for some time now. Trees have now been added to liven up the environment. To enjoy these leafy additions to Google Earth, make sure you turn on the 3D buildings layer on the left side panel. As a starting point, try a search for “Palace of Fine Arts San Francisco.” Once you arrive at your destination, click the zoom slider. You’ll then be taken down to the ground where you can use our new ground-level navigation to walk among the trees. Historical imagery in Google Earth allows users to look at map views of times like Warsaw in 1935, London in 1945 and Port-au-Prince Haiti before and after the January earthquake. The feature was first added in Google Earth 5, but it wasn’t always clear when and where it was available. With this version, Google has made it easy to discover historical imagery.