Earlier we’ve seen a man posting ‘I’m about to get shot’ on Facebook and gets shot immediately. But this time, a girl named Amanda revealed on Twitter that she was dying and her final messages were heartbreaking.

Twitter user @TrappedAtMyDesk‘s real name is Amanda. She was like many young women with her Twitter account, having 4067 followers. Amanda used to ask many inane questions and made a lot of funny jokes. Her life was running quite good. But last year in January, after a diagnosis her doctor informed her that she had Hirntumor and she would live no more than three months. After hearing the news she updated her Twitter with sincere and absolutely heartbreaking reactions. 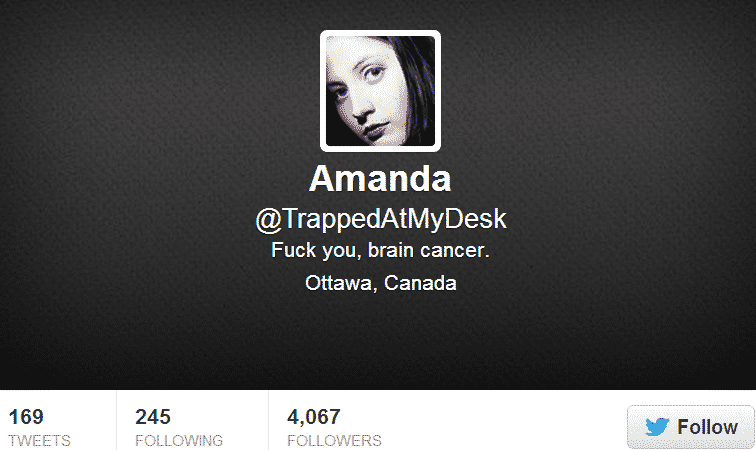 Amanda mentioned that she had quit her job as she found working “no point” for the last three months of her life.

The very final tweet she posted was “Tomorrow, I go back into the hospital for the last time.” The sadness and finality in her tweet was “Be good to each other” which was really heartbreaking.

2/3 days later, Amanda died. And after Amanda’s death, her brother James updated her account, letting people know that Amanda had passed away.

Blogger Shannon McKarney has made a tribute video of Amanda to honor her life. Here’s the video.

It’s really heartbreaking while you watch someone going through such a painful transition and you can’t do anything except for conveying sympathy. However, Amanda’s worries, hopes and musings are now immortalized on Twitter, giving the world a glimpse of what it’s like to go through something so terrible and life-changing.