Hrvoje Benko, a researcher at Microsoft is working on methods of recognizing shapes formed by hands and equating those with spatially-consistent gestures and putting the side of your hand down like a wall forms a straight line that could be used for a boundary, cropping or pushing objects.It’s a very natural extension of how you interact with a surface and that’s how you interact with most surfaces…………. 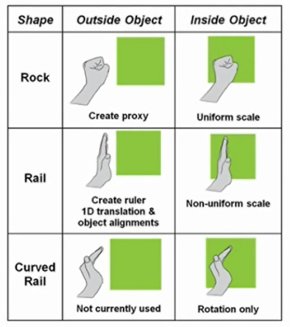 Touch screen technology has been around for quite a while and the way we’ve been interacting with it has been somewhat limited to swipe and multi-touch, the same swipe to the left and right, pinch to zoom.The folks over at Microsoft are looking for a way to integrate more natural movements to gesture-based controls instead. The Forscher have come up with a new gesture system nicknamed “Rock & Rails” where users form shapes perform the same actions with their fingers, but now have the added benefit of being able to use another hand to form a shape to constraint movement.This will allow users to add new functions to an app without having to clutter up the interface with new tools just turn your hand into a recognizable shape and let the touchscreen detect it. In the Rock & Rails system, users can close their fists into a rock to help pin an object on screen, while the user resizes it uniformly with his or her other hand performing the regular spreading gesture on the screen. Other examples include putting their hand’s edge straight on the surface of the screen, creating a virtual ruler that they can use to align objects against.

Direct touch manipulations enable the user to interact with the on-screen content in a direct and easy manner closely mimicking the spatial manipulations in the physical world. However, they also suffer from well-known issues of preci-sion, occlusion and an inability to isolate different degrees of freedom in spatial manipulations. We present a set of interactions, called Rock & Rails, that augment existing direct touch manipulations with shape-based gestures, thus providing on-demand gain control, occlusion avoidance, and separation of constraints in 2D manipulation tasks. Using shape gestures in combination with direct-manipulations allows us to do this without ambiguity in detection and without resorting to manipulation handles which break the direct manipulation paradigm. Our set of interactions were evaluated by 8 expert graphic designers and were found to be easy to learn and master, as well as effective in accomplishing a precise graphical layout task.