AT&T set up shop in Silicon Valley on Wednesday with its Foundry Development Center in Palo Alto, a facility where software and hardware developers can get help bringing their inventions to the real world, the site is AT&T’s third Foundry Innovation Center, following ones opened earlier this year in Plano, Texas, and in Israel. The AT&T Foundry centers represent an $80 million investment from AT&T and it is part of the company’s innovation strategy, which will see the 135-year-old communications giant work with third party developers, venture capitalists and technology solution providers……………. 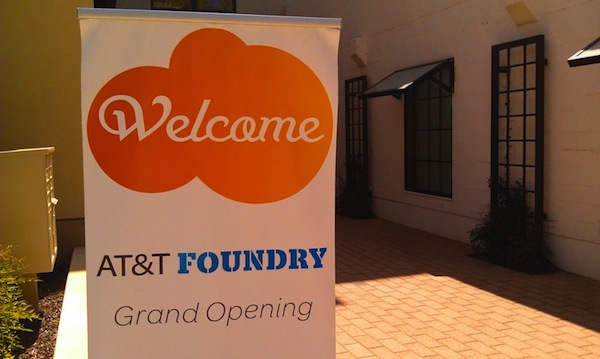 What happens when you open the network to developers from around the world with new tools and services, establish a collaborative infrastructure in which dedicated project teams have direct access to decision makers that can quickly make the right connections and open a new facility in the heart of Silicon Valley that’s directly linked to innovators across the world. You get increased velocity and a broader range of innovation with new apps and services 3x faster. That’s what AT & T. has done with its AT&T Foundry innovation centers, including the newest center, which opened in Palo Alto, Calif. AT&T Foundries are fast-paced and collaborative environments where AT & T. and technology providers team with developers to deliver the latest applications and services to customers more quickly than ever before. “AT&T’s approach to the innovation center concept is unique for the industry,” said Jim Goetz, general partner with Sequoia Capital. “Their strategy embraces how development gets done in the Valley. AT&T understands where it brings value to collaborations and how they can help others innovate in new ways to bring new ideas to market quickly.” Das AT&T Foundry is one part of AT & T.‘s overall innovation strategy that aims to accelerate technology development by collaborating with third party developers, venture capitalists and technology providers – sometimes by taking lead on a project, other times by contributing expertise, connections and resources to help developers bring an idea to reality. “The AT&T Foundry is a core component of our innovation strategy,” said AT&T Chief Technology Officer John Donovan. “This isn’t a technology showroom or testing facility. It’s a place where real innovation is occurring at an unprecedented pace in order to bring new services and products to our customers in a fraction of the time.”

“In here, we’re collaborating to open up our network with tools and know-how so that developers can more quickly add new capabilities to their apps,” said David Christopher, chief marketing officer, AT&T Mobility and Consumer Markets. “We’re also developing ecosystems and platforms such as mHealth to help drive further innovation and provide new wireless experiences for our customers.” The teams at the AT&T Foundry look for ways to speed ideas to market by identifying and eliminating common inefficiencies or bringing the right people together to deliver access to new technologies. One project currently in development focuses on ways to eliminate developer frustration with the wide range of business and technical relationships required to create applications. The team is collaborating on a concept that opens the network to developers through services such as messaging, location, payments and advertising accessible via HTML5. The result is significantly reduced complexity so that developers can more quickly build cool new apps. “AT&T has the resources and the vision to make real innovation happen,” said Michael Mullany, CEO of Sencha, which collaborated with AT&T to develop the HTML5 interface at the AT&T Foundry. “Together, we’re working to provide developers with the tools and access to network services that help them bring new ideas to reality in months rather than years. That means AT&T customers will have the latest and greatest apps at record speed.”

Das Palo Alto center, sponsored by Ericsson, is the third permanent AT&T Foundry facility to open worldwide, adding to a global network that includes facilities sponsored by Alcatel-Lucent und Amdocs in Plano, Texas and Ra’anana, Israel, respectively. The new location will join two temporary facilities in the Bay Area where collaborative projects are already underway, many on display during today’s opening day festivities. “AT&T and Ericsson are working to transform the way telecommunications companies develop concepts that will form tomorrow’s networked society,” said Hakan Eriksson, Ericsson Group Chief Technology Officer and President of Ericsson Silicon Valley. “AT&T is actively engaged with us to combine local insights with global ecosystems to help entrepreneurs bring innovative ideas to market as quickly as possible.” Fast Pitch, or speed date reviews, where companies or developers meet with key AT&T decision makers to evaluate projects or technologies. AT & T. is on track to hold 400 of the fast-pitch sessions in locations across the globe this year. The Innovation Pipeline (TIP), AT & T.‘s crowd-sourcing idea-generating platform, where more than 100,000 employees gather to share ideas and collaborate on bringing new products and services to market. AT&T Labs with 135 years of history in innovation and technology breakthroughs, which provides the starting point for many AT&T Foundry projects. Many of the organization’s 1,200 researchers also provide expertise to projects currently underway.