Research In Motion (RIM) has released the latest version of its BlackBerry Desktop Software,version 2.0, for Mac OS.With this update, it brings many useful features and they will be responsible for doing your task easier. Just have a look on below, you’ll also have the same opinion.RIM has also introduced a nice device switch feature, too — if you’re migrating from one BlackBerry smartphone to another, it’s now super simple using BlackBerry Desktop Software 2.0. 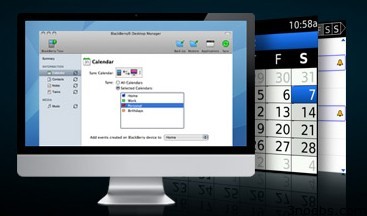 * Ability to back up and restore your handset.
* Synchronize contacts, calenders, appointments, tasks, notes and apps.
* Ability to move files between your Mac and BlackBerry.

This update requires Mac OS X 10.5.5 or later, BlackBerry Device Software 4.2 or later, and its size is 37 MB. You can get all the information and download link Hier.