AT&T may be in the news recently for controversy surrounding its impending acquisition of T-Mobile, but the company revealed that its first LTE/HSPA+ devices would be hitting store shelves next week and the The USBConnect Momentum 4G is a USB dongle that users can plug into a free port to access AT&T’s burgeoning LTE network. Users of the USBConnect Adrenaline will be able to download a firmware update on August 26th that turns on its dormant LTE radio and the carrier also officially announced that its DataConnect plans will be offered for $50 per month for 5GB with usage charges of $10 for each additional GB…………… 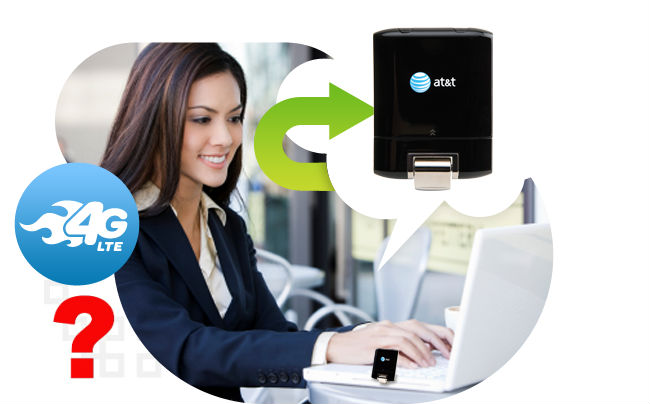 Das AT&T USBConnect Momentum 4G und AT&T Mobile Hotspot Elevate 4G will be available in stores and online Aug. 21. AT & T. also confirmed data pricing for data-only mobile broadband devices on the company’s forthcoming LTE-Netzwerk. Customers will be able to choose 5 gigabytes of data for a monthly rate of $50 with any additional data consumed available for $10 per gigabyte. The LTE-upgradeable AT&T USBConnect Adrenaline will also be able to be updated to LTE beginning Aug. 26. As the first devices that will be able to take advantage of AT & T.‘s future 4G LTE network arrive in AT & T. stores, customers who choose the AT&T USBConnect Momentum 4G and AT&T Mobile Hotspot Elevate 4G will be able to select the same $50 for 5 GB data option as many current USBConnect or Mobiler Hotspot customers do today. Also capable of 4G speeds on AT&T’s HSPA+ Netzwerk, das USBConnect Momentum 4G, Mobile Hotspot Elevate 4G will be the only LTE devices in the United States to have a 4G/HSPA+ network with enhanced backhaul to fall back to if a customer moves outside of LTE coverage.

Already in customers’ hands, the AT&T USBConnect Adrenaline is LTE-upgradeable, containing an LTE chipset that can be enabled with a software update. Those customers can visit www.att.com/adrenaline to download that update beginning Aug. 26. AT & T. recently announced plans to roll out 4G LTE in five markets – Atlanta, Chicago, Dallas, Houston und San Antonio – later this summer. Customers with compatible devices and 4G LTE coverage in those markets will be able to enjoy access to 4G LTE speeds as AT&T’s 4G LTE is turned up. As AT & T. rolls out 4G LTE, customers outside of its 4G LTE coverage areas will still have access to AT&T’s fast HSPA + network. When combined with enhanced backhaul, HSPA + ermöglicht 4G speeds that are up to four times faster than AT & T.‘s already fast mobile broadband speeds. Because AT & T. has taken the extra step of deploying HSPA + technology with enhanced backhaul, its customers will have access to consistently fast mobile broadband speeds when moving in and out of 4G LTE areas. By the end of 2011, AT & T. plans to offer 4G LTE to customers in at least 15 markets, covering 70 million Americans.