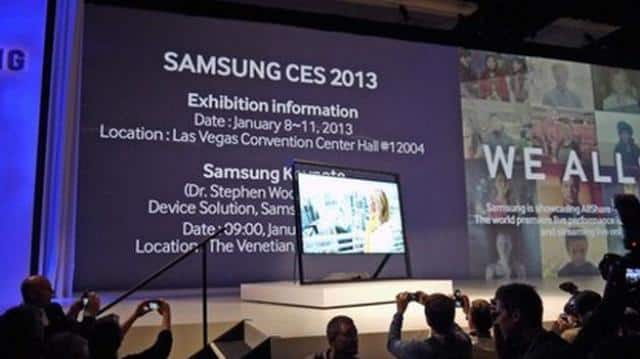 CES 2013 is about to begin. South Korean tech giant Samsung has unveiled two new Smart TV. The interesting thing is, both of these smart TVs have quad-core processors inside. On Monday at Unveiling CES 2013 in Las Vegas, Samsung debuted its new S9 Ultra HD TV. The TV has 120-watt sound system into its frame and offers four times the resolution of a traditional HD display. This S9 Ultra HD TV runs on a Samsung quad-core processor; hence, users can search for something in the web and browse applications faster than ever. Samsung has mentioned, the S9 will be released with 85-inch or 110-inch (9 feet) wide design.

Samsung has also introduced another new LED Smart TV – F8000. The F8000 will be released in five different models, ranging from 46-inch to a 75-inch display. The company is saying this is the “world’s first LED TV” which has a quad-core processor.

Both of these Smart TVs will also feature revamped Samsung Smart Hub and T-Commerce experience. The new Smart Hub will let users search for specific television shows, peruse photos and other files that are hosted on their smartphones or tablets. The T-Commerce will allow users to search for the manufacturers that design outfits worn by their favorite TV stars and then purchase those items directly from their Samsung TV.

All models of these two smart TVs will come with “Voice and Gesture Recognition” feature. Besides, both S9 Ultra HD TV and F8000 will host many “smart apps” including S-Recommendation, a tool that recommends certain television shows or movies to users based on their prior selections. That’s not all. The S-Recommendation tool can even predict what users prefer to watch on the TV based on users’ habit of watching TV programs. Added to these, Samsung will also offer Smart TV Evolution Kit for these Smart TVs. This will enable users with prior-generation Samsung Smart TVs upgrade to the new Samsung Smart Hub without having to splurge for a new 2013 Smart TV model.

Samsung hasn’t revealed the pricing and the availability of S9 Ultra HD TV and LED F8000 TV yet.