Make a Wish Foundation recently turned San Francisco into Gotham City for an adorable five-year-old recovering from cancer. Miles Scott had an entire day as a Batkid as the police rushed to help him rescue people in trouble and restore the peace of the Gotham City.

The entire event was a huge sensation not only for San Francisco but also for the international audience. It launched the social media into a frenzy, praising the efforts of the city to turn the dream of Miles Scott into a reality.

The entire effort was very thorough and involved all the relevant authorities. The Batkid initially jumped out of his Batmobile and rushed to save a damsel in distress from the nefarious villain Riddler. Once he had done this, he was helped by the Police chief Greg Suhr and his men to nab the Penguin, yet another evil character. 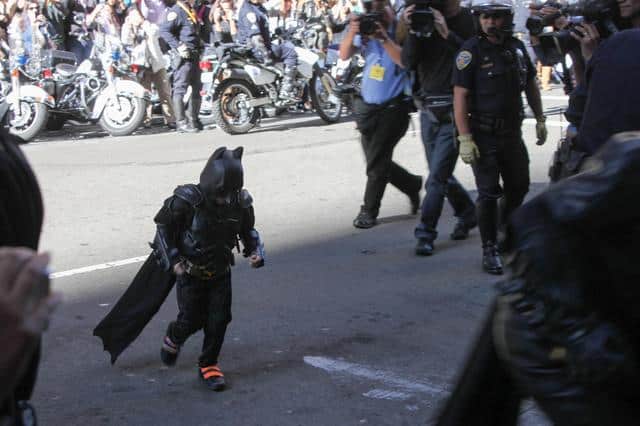 Thousands of people turned out on the streets to witness the magnificent occasion and soon, the entire affair was making national and international headlines. The San Francisco Chronicle printed a special edition titled ‘Gotham City chronicle’ along with the headline ‘Batkid Saves City‘.

Even the US Attorney office put out a spoof press release about ‘San Francisco/Gotham’ announcing that both Riddler and the Penguin have been nabbed and will be charged with conspiracy and kidnapping. The highlight of it all came when even President Obama took notice of the whole thing and posted a video message saying ‘Way to go, Miles! Way to Save Gotham City.’

Make a Wish received an overwhelming response as a result of the event and the website of the foundation often was inaccessible due to extra-ordinary traffic. In all, this was a very inspiring event which showed that dreams can come true and that even five-year-old can inspire heroism.