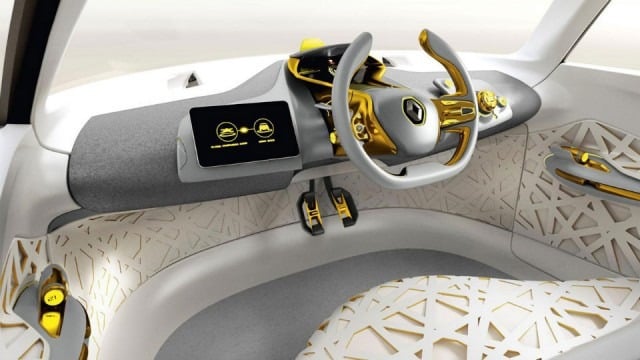 Earlier we have seen many conceptual cars that come with amazing design and superb technologies. French multinational vehicle manufacturer Renault has made a conceptual car called Kwid. The specialty of this car is there is a drone inside its roof that can come out and fly, and warns the driver about traffic jams on the road ahead. The Kwid is a small SUV vehicle with a very modern design. It was first seen at the 2014 New Dehli Auto Expo. The car comes with full of futuristic ideas, which includes a flying quadrocopter drone that would be launched from the car’s roof. Renault calls it the “flying companion.” Its interior is unapologetically modern.

However, Renault has mentioned that this drone will either be controlled manually with the tablet attached on the car’s dashboard or will be flown autonomously. The drone will help the driver to warn about traffic jams and other problems on the road ahead. In addition, the drone will be able to replay live video right back to the car. Here a video for you.

At present, Renault is envisioning a front wheel car, with a turbocharged engine, but there is no word on when the Kiwid would hit the market. Here’s another video showing Kwid’s flying drone in more detail.

Semi-Robotic Trucks May Help Save Fuel