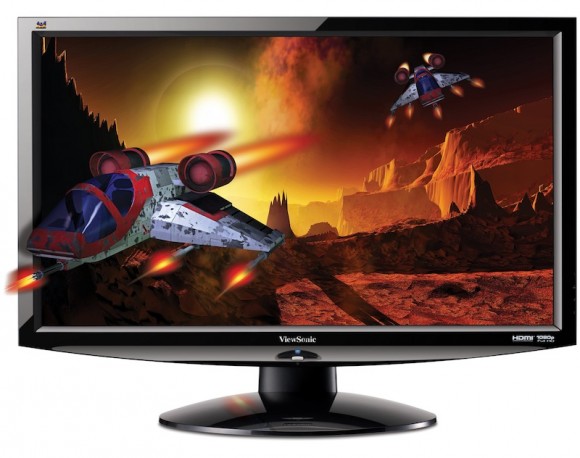 ViewSonic has launched its first 24″ 3D-LED monitor, the V3D241wm-LED, giving people the opportunity to watch 3D content in full HD. The monitor has been certified by AMD for use with its Radeon™ range of graphics cards, ensuring maximum compatibility and ease of use. The monitor includes a set of wired active shutter glasses, allowing users with a compatible computer to get started right out of the box.

Using the included 3D glasses, the V3D241wm-LED can display 3D games and movies without any loss of quality by taking advantage of the monitor’s 120Hz frame rate and ultra-fast 2ms response time. The ultra-responsive LED screen has a brightness level of 300 nits and a contrast ratio of 20,000,000:1, providing a high level of detail and colour reproduction.

Shipping with a pair of 3D active-shutter glasses, the LED-backlit display offers a 3D-enabling 120Hz refresh rate, a full-HD 1,920×1,080 resolution, a 2ms grey-to-grey response time and a quoted dynamic contrast ratio of 20,000,000:1.Stereo speakers are integrated to provide a basic four watts of audio output, as is a USB port for the bundled glasses, and users are given a choice of HDMI, DVI or VGA connectors.

The V3D241wm-LED features two SRS two watt speakers, providing superior audio quality while also allowing users to maximise desktop space. The monitor has also been certified for use with Windows 7, providing true Plug and Play compatibility. In addition, the unit incorporates LED technology with an Eco-mode options, which can reduce power consumption by up to 50 per cent over conventional displays.The ViewSonic V3D241wm-LED should be popping up at retailers right about now priced at £330.