The world’s largest Laser- machine was appeared in American Science-Fiction action Film Star Trek Into Darkness. And lately, physicists have used this world’s largest laser to crush a diamond, which is 50 million times harder than Earth’s atmosphere presses down on us, in order to study Planet formation.

Diamond consists of carbon, and in our solar system oxygen is twice as common and makes up silicate rocks, a major component of the sun’s planets. Still, scientists have speculated that diamond worlds may exist elsewhere. If a solar system arises with more carbon than oxygen, then carbon should soak up the oxygen by forming carbon monoxide, leaving excess carbon to create carbon planets—which, under pressure, become diamond worlds. Neptun is one of those planets that they suspect has a diamond core. But this planet, as well as other Neptune-sized planets, has an extremely dense core – something that is not easily recreated on Erde.

So, in order to study the formation of planets, inside a target chamber at the US National Ignition Facility – which was featured in the newest Star Trek Into Darkness movie – physicists condensed carbon crystal to the core pressure of Saturn – 14 times that at the center of the Earth. Note that, the laser measures more than 30 feet long and can be focused on a millimeter target. 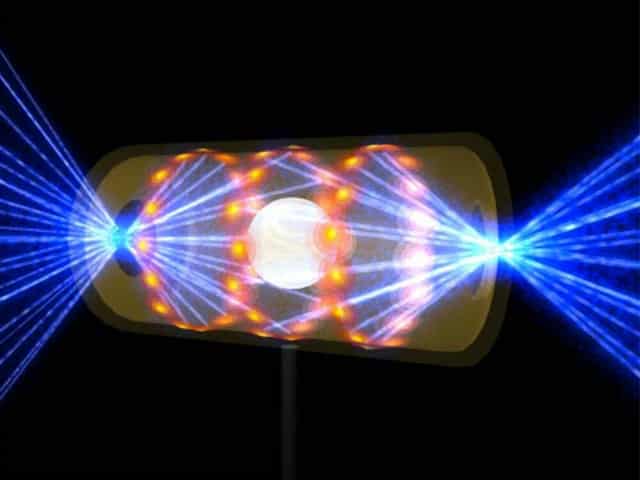 Dr. Ray Smith von Lawrence Livermore National Laboratory in California, who is also the lead author of the study said, “We don’t know what lies within the core of Jupiter or Saturn but now for the first time we now have the ability to study how matter exists under these extreme conditions of pressure and temperature. That’s a record. No one’s compressed diamond to that extent before. Our experiments provide a method for recreating conditions within the cores of giant gas planets – both within our solar system and beyond.”

According to other physicists, this study will help them better understand how material behaves at the great pressures that prevail deep inside giant planets.