With the incessantly explosive growth of mobile devices, vendors are ever in need for more computing prowess in increasingly smaller chips. Addressing the demand, Nvidia has now unveiled Tegra K1 mobile processor which, it claims, will put mobile computing at par with desktops.

Switch To T-Mobile And The Carrier Will Pay Your…

If Nvidia’s claims turn out to be true, the chip-maker is about to launch a revolution in the world of mobile devices. Unveiling the new Tegra K1 mobile processor at CES 2014 in Las Vegas, Nvidia’s CEO Jen-Hsun Huang revealed that the chip contained a whopping 192 cores, effectively bringing ‘mobile computing to the same level as desktop computing.’

This claim may sound outlandish but it is fairly accurate. That’s because according to the company, this new Tegra K1 chip will be able to support games such as ‘Unreal Engine 4‘ by Epic Games. In other words, the chip will enable mobile devices to run some fairly heavy PC and console games. The breakthrough has the potential for disrupting the mainstream gaming industry yet again by opening a huge opportunity in the form of potential mobile users for even the high-specs games. 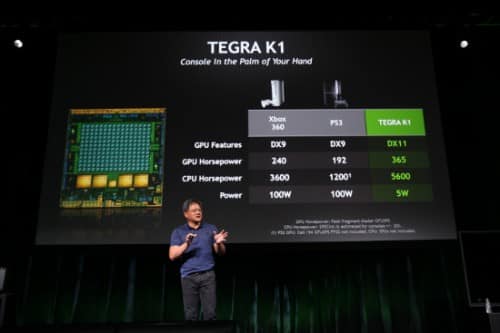 For Nvidia, the chip promises a lot more. The company says that Tegra K1 is designed not only for high-end games, but also for 4K TVs, Autos, game consoles and a lot more. Surely, if the new processor is able to deliver on its promises, its heavy-duty computing prowess coupled with the nifty size will make it a darling of the world of computing.