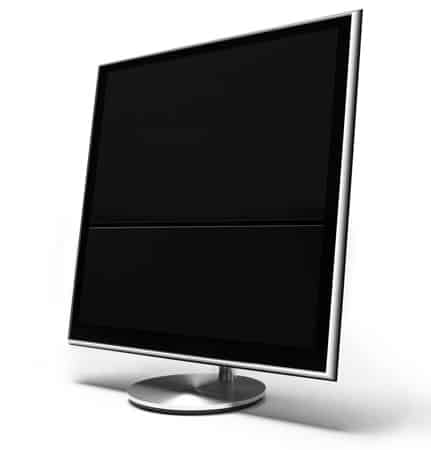 Bang & Olufsen introduces 46-inch LCD with high-end, built-in speakers 10-46 LCD. this one won’t come cheap, but it will definitely make more of a statement in your living room than the average big-screen LCD. If this one does look a tad familiar, it’s because this new BeoVisoin 10-46 is basically just a larger version of Bang & Olufsen’s existing 40-inch BeoVision 10, which boasts the same brushed aluminum frame, 200Hz refresh rate, and LED backlight as it’s new, larger counterpart. They have not official word on price but the 40-incher came in at under $10,000.

The new Bang & Olufsen BeoVision 10-46 is a premium product. It should be available in “selected markets” sometime this April, so if you’re an HDTV buff with style and taste, better start saving as the 40-inch version was selling for some $8,700 (in Europe) when released, last fall. BeoVision 10-46 will also be based on a LCD panel with Edge LED backlight, like BeoVision 10-40. The 46-inch version expected to be virtually identical to the smaller 40-inch BV10-40 besides the larger format. This also means that it will feature an integrated 200 Hz system.

The speakers and the bass port in BeoVision 10-40 has previously been tested in larger screens, and can too readily be integrated into a 46 inch version. We do not know if BeoVision 10-46 will introduce improvements on audio, however.