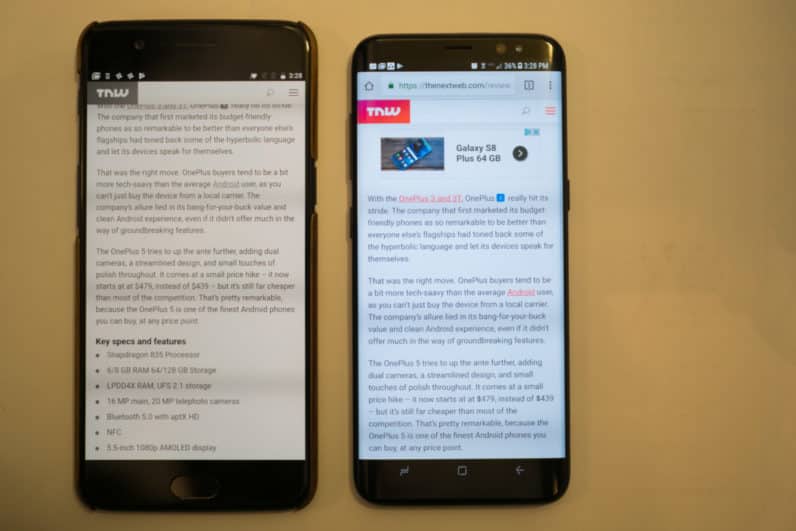 The “Flagship Killer” phone OnePlus 5 has arrived. The phone has Snapdragon 835 processor with 8gb ram. Let’s see inside of the phone. The OnePlus company already made a great impression on the people. They proved that money doesn’t always matter. That’s why the reason they made “Flagship Killer” smartphone with very cheap price. They had released a small number of OnePlus phone, OnePlus One, OnePlus 2, OnePlus X, OnePlus 3, OnePlus 3T. And now they released OnePlus 5. This phone is definitely a “flagship killer” phone and powerful phone ever. There have many reasons to call it “Wise” phone. Let’s go deep on the phone.

First of all, we talk about the design and you will be arguing that it looks like iPhone 7. Yes, it is very similar to iPhone 7 Plus. The curved antenna lines and dual rear cameras are very similar to iPhone 7 plus. But iPhone 7 plus is a little bit bigger than OnePlus 5. The microphone and LED flashlights also in the same position like iPhone 7 plus. If you say OnePlus 5 is totally copying to iPhone 7 then it is Wrong. The curved antenna lines are not first introduced on iPhone 7. Meizu phone had made that first. It was named “Meizu’s Pro 6”. Let’s look at the bright sight. This phone has “Optic AMOLED” display. They are stick to 1080 x 1920 pixels resolution. So, battery life will be better. Because more resolution needs more processing power. In the downside fingerprint sensor is situated. It is similar to the old OnePlus phone.

“Good Names” comes with “Good Things”. That’s why it is “Flagship Killer” phone. The phone has comes with Snapdragon 835 processor which latest till now. The another surprising news it has 8gb Ram with 128GB storage. The another version has 6Gb ram with 64gb storage. For boosting gaming experience it has Adreno 540 GPU processor. It supports OpenGL 3.2 with Directx 12. On the other side, it has Non-removable Li-Ion 3300 mAh battery. It is good for one day use. After all, you can charge it with “Dash Charge”. It will power-up your device within 30 minutes.

It has dual-rear-camera with 16MP wide angle camera with f/1.7 aperture and 20MP telephoto lens which has f/2.6 aperture. Your portrait photo background will be blurred. So, you can compare it with DSLR camera. The (OIS) optical image stabilization system is now upgraded and works superfluous.

This phone works with Oxygen OS 4.5.0 powered by Android 7.1.1 Nougat. It’s latest one. Another good feature is “Reading Mode”. It is a simple visual filter for reading ebooks and pdf. You can use it with full screen. Now the price looks like higher than the older one.

Detail Specification can be found here.

How To Upgrade HTC HD7 SD Card to 32GB