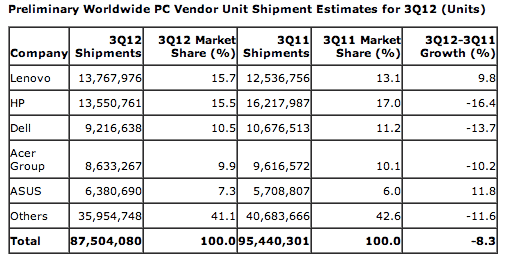 The PC market hasn’t been good for a while due to the wild popularity of mobile devices. People prefer getting laptops and tablets rather than purchasing an actual PC. Nonetheless, there are a number of tech giants still competing in this arena. According to the research firm Gartner, Lenovo has now overtaken HP to become the top global PC vendor. Lenovo has been able to bag the crown during the third quarter of the current year. The company has been stumbling right at the heels of HP for quite some time. In 2011, it was still at second place but this year, Lenovo was able to boast its sales by 9.8% and grab the top slot.

During the 3rd quarter, Lenovo shipped out a total of 13.7 million units whereas HP was able to deliver only 13.5 million units. However, HP is not ready to admit the statistics presented by Gartner and claims that the research firm didn’t take into account the sales of its workstations, which forms a sizable portion of HP’s overall PC sales.

The company has also cited an alternate report by research firm IDC which has recently ranked HP as the top global PC manufacturer with Lenovo trailing behind by a mere half percent.

Either way, it seems that HP’s days as the undisputed king of the PC market are over and the Chinese firm is taking over the throne. The irony, though, is that neither may be able to relish the success for too long since PC sales are falling drastically in the face of growing mobile sales.