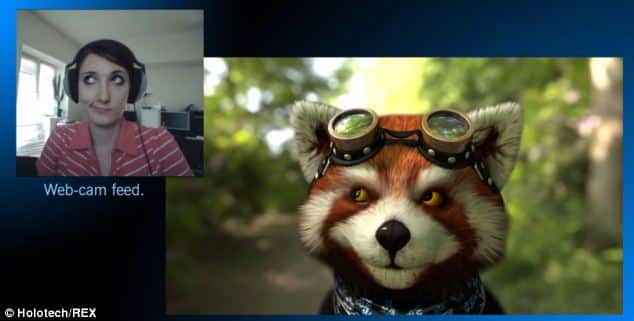 Real life animals like dogs, cats etc can’t talk, but the animated animals can. We already know that how that’s possible. However, there are many software in the internet world like Talking Tom cat that lets animals repeating back whatever you say to them. But now, there’s a new computer program called FaceRig that lets users to adopt the visual appearance of an assortment of characters, which straight away mimic their expressions when chatting online.

FaceRig is created by five ex-game developers in Bucharest, Romania. This software will allow users take the form of anything – from a cute red panda to a horned demon, and then whatever the user will say, the character will mimic the same thing.

That’s not all. Users will be able to change their voice, choose environments and ‘dramatic lighting’ as well as create their own props and characters. At this moment, you might be thinking, how is it possible, right? Well, it’s very simple. FaceRig captures facial expressions of the user via an ordinary webcam and then reproduces the expressions on the face of the chosen avatar in realtime. In fact, this technology will allow users to ‘become digital actors on a virtual movie set’. What more notable about the software is users will be able to use FaceRig with Skype or any other webcam service. Holotech Studios, one of the developers of FaceRig claims that they have created the “world’s first mass-marketed expression capture software.” At present, the software is in development stage. The FaceRig developers have targeted to raise a fund of $120,000 by February 05, 2014, 11:59 pm PT via Indiegogo, one of the popular crowdfunding platforms, and astonishing all, the team has already collected (as of writing) an amount of $216,488.

FaceRig will be released by August 2014 and its cost will be $5 (£3) at starting level, but its price will rise as the program becomes more sophisticated. Here’s a video of FaceRig.

Source: Indiegogo
Thanks To: Daily Mail

Download SwirlyMessage For Send SMS And MMS From iPad 2 3G