Apple has released iMac Graphic FW Update 3.0 to address graphical hanging issues that some people were reporting on iMacs and after upgrading to Lion, many users had reported their iMacs were locking up entirely after playing certain kinds of videos, requiring them to reboot in order to regain control, this firmware update hopes to address this problem. The file itself is 482 KB, but it does require you to reboot your iMac and ensure the power is not interrupted during the update………………. 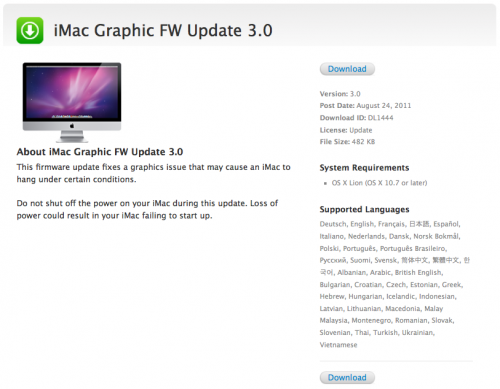 Apple released a pair of new updates meant to fix video-locking issues on iMacs that run Lion and improve hardware compatibility when running Windows in dual boot mode on your Mac. The iMac Graphic FW Update 3.0 is now available for download, weighing in at a paltry 482KB and Apple says the firmware update fixes a graphics issue that may cause an iMac to hang under certain conditions.  You can also download this update by choosing Software Update from the Apple menu, in which case the update mechanism will determine whether your iMac’s graphics card needs updating and offer the refreshed software appropriately. Also, Boot Camp got a small update for Windows 7 and the 200MB download includes critical bug fixes and hardware support. It is recommended for all Boot Camp 3.2 users and requires Windows 7 plus an existing installation of Boot Camp 3.2 on your system.