OMGPOP has released the game ‘Draw Something’ only five weeks ago. Ever since the release of the app, it has been downloaded more than 20 million times within these five weeks! And right now, it is the number one free app for Android and number one paid as well as free app for iOS. And at this rate, the app may soon become one of the all-time-favorite apps for smartphone users. 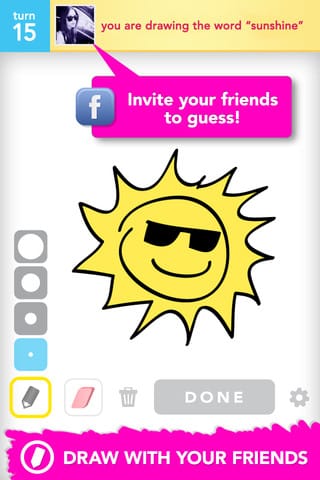 Draw Something resembles somewhat to another very popular game which hooks a lot of users – Pictionary. The ‘Draw Something’ game basically lets you compete against another person who can be a random stranger or one of your own contacts.

The game is very easy to learn and totally hooks you up once you get a hang of it. Moreover, while it is really simple, it does make full use of a touchscreen interface. Also, being able to draw basic figures and pictures may make you feel being young all of a sudden. It may be reminiscent of the olden golden times of school life. However, don’t think that game-play in itself is also that easy since sometimes, drawing some very seemingly simple figures may turn out to be quite difficult.

Another thing that may be very effective in gathering such a huge crowd of addicted users is that the game instantly rewards you with gold coins if you drew better than your opponent. You can use the coins to buy extras such as more colors. These coins can also be bought with real-life cash, and that is why OMGPOP is earning a very handsome sum.

According to the company’s CEO, the company is earning a six-figure sum every single day. Quite truly, the wild success of the game has turned into a fortune for the company.

Skype On iOS Is Vulnerable For Attack