Navigon announced that its mobile turn-by-turn navigation application is now available on the Windows Phone 7 platform, Navigon for Windows Phone 7, works only on the newly released version 7.5 of the mobile operating system, aka Mango and the company was also showing off its upcoming releases of MobileNavigator for Android and iOS. Taking advantage of Windows Phone 7.5 (Mango), it features an augmented reality function Reality Scanner, which lets users instantly and effortlessly identify nearby destinations while travelling on foot and users can also select addresses directly from the phone’s contact list to locate it on the map. NAVIGON for Windows Phone 7 is available now at $29.99 until 11/15/11 (regular price $49.99)……………. 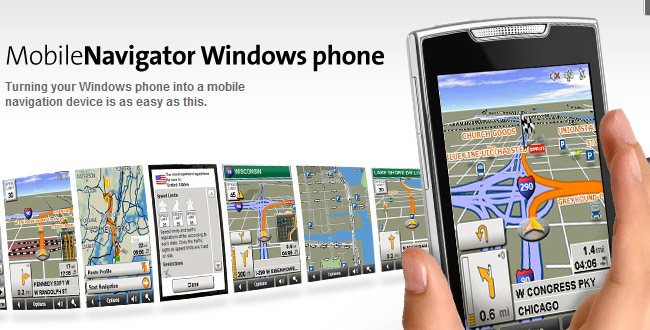 Microsoft Is Readying Virtual Assistant Cortana For A Recent…

NAVIGON AG, a leading provider of mobile phone on- board navigation announced the launch of the first on-board navigation app for Windows Phone 7 smartphones. NAVIGON‘s app is available for Windows Phone 7.5 users and takes advantage of new features made available to developers with this new release such as the ability to save an address to the start screen. In addition, NAVIGON also launches a free traffic app for Windows Phone 7, traffic4all. Similar to a standalone navigation device, NAVIGON for Windows Phone 7 works in areas without a cell phone signal, so users can get directions and information anytime, anywhere. Other navigation apps for Windows Phone 7 are dependent on a cell phone connection to download map and routing data. Therefore, no cell signal can render navigation useless or interrupted until a connection is reestablished. “We are pleased to bring our award-winning navigation app to Windows Phone 7,” said Gerhard Mayr, NAVIGON vice-president of worldwide mobile phones and new markets. “The app includes many of the same signature features that have made NAVIGON’s apps successful on other platforms, such as Android and iPhone. The user interface is fully customized to the Windows Phone 7 experience, so users of this platform will feel right at home.” NAVIGON for Windows Phone 7 includes spoken turn-by-turn directions, visual lane guidance, live traffic information and rerouting, among many other features. NAVIGON’s new app runs on Windows Phone 7.5 and also takes advantage of new features made available to developers with this new release. These features include the augmented reality function Reality Scanner, which provides an instant and effortless way of identifying nearby destinations while on foot; an option to select address information directly from the phone’s contact list and the ability to save a favorite or home address as a shortcut on the start screen.

Additional features include Google Local Search, which allows users to find local points-of- interest instantly; one-tap access to help users find critical services such as hospitals and police stations in case of an emergency and the ability to select address information directly from the phone’s contact list. In addition to its turn-by-turn navigation app for Windows Phone 7, NAVIGON also announced a free traffic app: traffic4all helps drivers to avoid gridlock and save time by providing a clear overview of traffic conditions. NAVIGON developed an intuitive user interface that displays traffic incidents on a map with a single hit of a button. Colored road overlays indicate traffic flow, ranging from green for normal to red for traffic congestion or black/white for blocked roads. The app also allows users to plan ahead and look up traffic forecasts by entering a specific time and location. traffic4all uses traffic information from NAVIGON‘s partner INRIX. The leading traffic expert covers more roads than any other provider, delivering real-time traffic information that extends beyond major highways and interstates covering more than two million miles in North America and Europe. NAVIGON for Windows Phone 7 includes on-board NAVTEQ maps for the USA and is available for $49.99 in the Windows Marketplace. NAVIGON offers a special introductory price of $29.99 until November 15, 2011. NAVIGON traffic4all is available at no cost in the Windows Phone Marketplace. An upgrade option for $1.49 turns off the integrated ads.

Motorola Teamed Up With Verizon For Z-Wave Monitoring Service

Will Microsoft Integrate Xbox One With Windows Phone?

Microsoft Says Facebook Home Is a ‘Copycat’, Windows Phone Is the…

Support For Windows Phone 8 Will End In July 2014, Says Microsoft