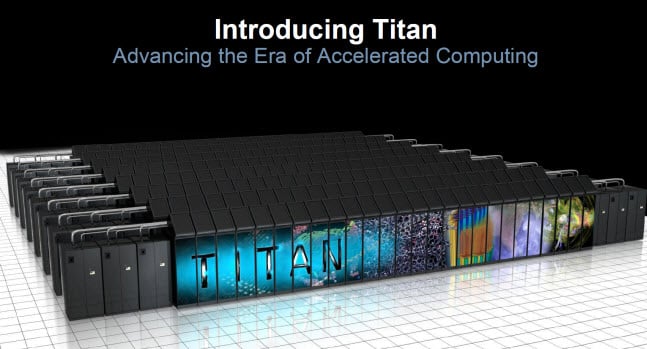 Given the sheer amount of data that needs to be sifted through for large-scale calculations such as worldwide weather forecast, supercomputers are a necessity. The Oak Ridge Leadership Computing Facility has now launched the world’s fastest supercomputer, Titan, for researchers from a number of fields. Interestingly, the supercomputer makes use of Nvidia GPUs, which are otherwise commonly known for use in gaming systems. The CPUs for Titan come from AMD and the sheer amount of computational power that this machine can command renders it the world’s most powerful supercomputer.

According to the Chief Technology officer of Nvidia’s GPU accelerated computing business, Steve Scott, “Why care about these big computers? It’s really because society’s got big problems. There are healthcare issues, lots of diseases across the board, an aging population. Energy is a huge problem facing the world and our country. … Increasingly computers are used to solve these problems.”

Given the scale of these problems and the size of data that needs to be analysed to create any models about them, supercomputers are indeed the need of the day. Titan, with its extraordinary computing power, can render invaluable help to research in a number of fields which include:

All of these tasks require hefty amounts of computations and oftentimes, researchers have to relent to inadequately powerful machines and give up their pursuit. With Titan, this may change.

The supercomputer will be open to research by academics as well as governmental labs and a number of industries, thus being used for a number of useful purposes. Scott very rightly speculates, “All of these areas have tremendous real world societal benefits. And they need high performance computing to drive them forward.”

The second-fastest computer in the world, that bagged the top crown back in June this year, was Sequoia System, also created by Department of Energy. It was able to handle up to 16.32 petaflops. Naturally, Titan surpasses it by a significant margin.