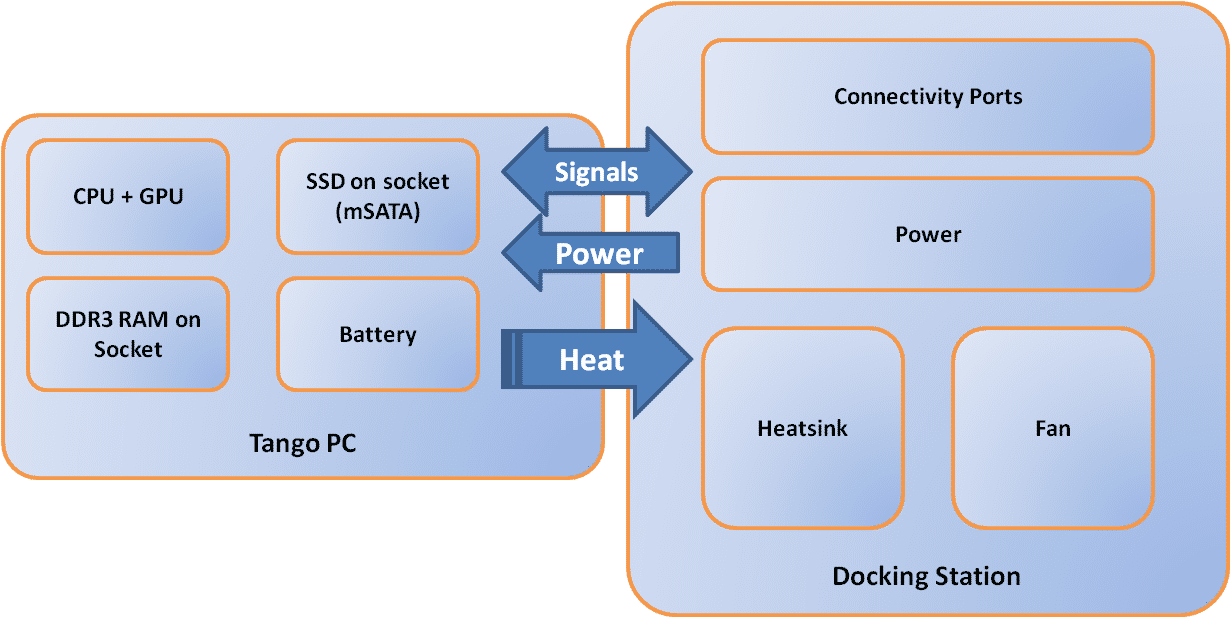 San Diego-based Tango has a dream of building such a PC that will not only be powerful and as functional as a desktop, but also something you could take around with you in your shirt pocket or purse every day. And that’s the idea which has inspired Tango to make the world’s most powerful, pocketable, gameable PC.

The Tango PC measures 4.9-inch (l) x 3.15-inch (w) x 0.5-inch (b) (125 mm x 80 mm x 13.5 mm). Undoubtedly, a device having such a measurement is small enough to carry around in most pockets. The Tango team is using laptop hardware instead of using full-sized desktop components to make this pocketable PC. However, the PC features an AMD A6-5200 Quad Core 2GHz processor, an integrated GCN GPU HD8400. Besides, it has a single DDR3 RAM socket with support for 2-8 GB of memory, and a SATA III mSATA SSD socket that can support a solid state drive.

Tango has used separate docking system within the device, which houses all of the necessary ports such as USB, HDMI, ethernet, AV, and power. A user jacks the portable part into the dock, and that is what allows the computer to actually function. On the other side, the battery of this small device allows it to suspend when removed from a docking station and resume right where a user left off when plugged in again. If the system is left in standby mode for more than a few hours, it automatically moves the data over the disk and goes into hibernation to prevent any loss. Each PC can be used with multiple docks, allowing the same one to be used in multiple locations. The dock itself is not much larger than the actual PC. It measures 135 mm x 135 mm x 27 mm. There is built-in Wi-Fi, meaning gamers will need no additional dongles. PC gamers will not be able to run high-end PC games on it, but they will be able to run Call of Duty 4 (a shooter from 2007) smoothly.

The company is expecting to deliver the PCs top backers in April of 2014. Here’s a video that Tango demonstrated at CES 2014.