Father Built A Quadcopter Drone To Track His Son

Paul Wallich, a tech-savvy father, used to walk with his son 400 meters each morning to drop him to the bus stop. But Wallich was tired of doing this regularly. So he decided to make such a drone that will accompany his son while he goes to the bus stop, and will let Wallich track his son. Finally, Wallich has made a quadcopter. Want to know how he did that? 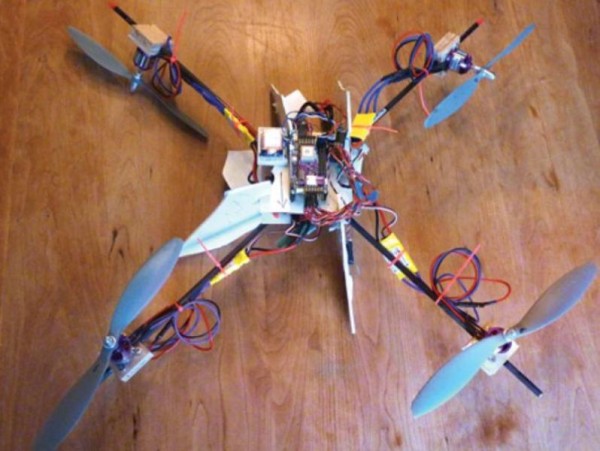 Wallich decided to make a quadcopter because of its simple design, maneuverability and ability to hover. He bought parts of a quadcopter and started to integrate those. The quadcopter has a central frame to hold the electronics, spars of aluminum to support the motors and propellers, and few legs to cushion the quadcopter’s landing. There is a main control board with sensors, batteries, a power distribution board, power controllers for the motors and a radio receiver for standard remote-control flying, and an RF modem for computerized control.

One Wheel Based Self-Balancing Electric Unicycle Made By MIT…

He used an ArduPilot Mega (a controller) to control the quadcopter as it had integrated CPU, input/output ports, three-axis gyroscope and accelerometer, and a barometric altitude sensor. There is a daughter-board soldered on top that can hold a thumbnail-size GPS unit, a magnetometer (compass), and a slot for microSD card storage. The entire board needs 5-volt power. He strapped a smartphone with it.  However, his quadcopter can fly autonomously through pre-programmed GPS instructions and altitude.

Wallich installed Mission Planner Utility, the best-documented ground station software, in his Windows desktop to initialize the ArduPilot Mega’s firmware and calibrate all its sensors and controls. He used Qgroundcontrol on the Linux box in the basement and on his wife’s MacBook when the quadcopter goes with his son.

Paul Wallich has shared the full story in IEEE Spectrum.