According to Paul Gale, a game veteran, Rocksteady Studio is working on Teenage Mutant Ninja Turtles: Manhattan Crisis game after Batman: Arkham city. However,Rocksteady Studio hasn’t issued any official comment to confirm about the existence of the game yet. The game is rumored to be developed for Xbox 360, Wii U, Nintendo DS and PlayStation 3. The game is expected to be released in 2013. 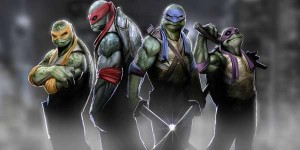 According to the rumor, Leonardo, Donatello, Raphael, and Michelangelo are the four playable characters, each with their own varied move set and weapons. Players can be able to pick up weapons of choices because there will be a lot of in-game weapons. There will be flashback version of the game played as Master Splinter/Hamato Yoshi. Game-play will be of similar manner as Batman: Arkham City consisting of dodging and counter attack. Bebop , warthog and rhinoceros, Dr. Baxter Stockman, Shredder , and Krang would act as villain bosses in the game. The Turtle Van and Turtle Blimp will be present in the game. Graphics engine will be the same as that of Arkham City. A lot of gadgets will be included in the game such as ninja rope, foot spike etc.

As there is no image leaked or any of trailer or game-play video is released, the news may be just a fluke. However, there is still a possibility of releasing more news or debut videos at the end of this year. If that happens, we will be the first to inform you.

Samsung’s Next Galaxy Note To Show Off In Late August