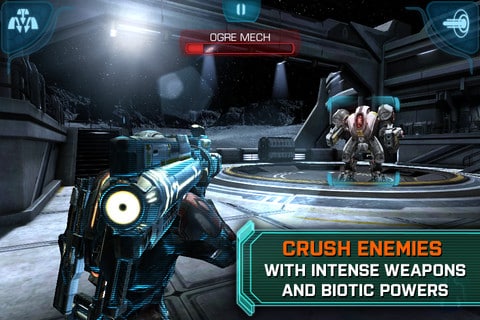 So what exactly is Mass Effect infiltrator about? Well, you get to play the game as ‘veteran Cerberus agent Randall Ezno.’ This is pretty much linked the earlier part, Dead Space, and you will best be able to enjoy the game if you have followed the franchise over the year, being well acquainted with the characters and the story in Dead Space.

However, if you are looking at full fledge game, quite like the actual version, you will be in for a disappointment. This is just a companion and you should expect from it accordingly. The problem with this app is that provides a very basic gameplay, kind of merely a shooter game. The storyline also seemed to have been squeezed in so much that it barely is interesting any more. Moreover, it can  take you a while to get a hang of tapping and shooting on an touchscreen, given the fact that you won’t be using a joystick with the app. This can be pretty annoying at the start but you will get a hang of it eventually.

ME: Infiltrator has a number of similarities to the Dead Space game, which has been one of the wildly popular games for iPad. But if for nothing else, you can use the credits you earn in this game to enhance your ‘Galactic Readiness’ in Mass Effect 3. That is perhaps one of the best incentive, if not the only, to actually pay for the game and play it. You can download the game right here.