The introduction of Snake and the Metal Gear series onto iPhone originally filled us with fear. How the heck could they cram a beast of a game like MGS4 onto a handset without it being utter shit?

The answer is to completely shake things up and turn it into a shooter of tin-can alley proportions. Thankfully it works and Konami have even managed to cram some of Hideo Kojima’s infamous, long-winded dialogue into the mix too. Umm, yay? 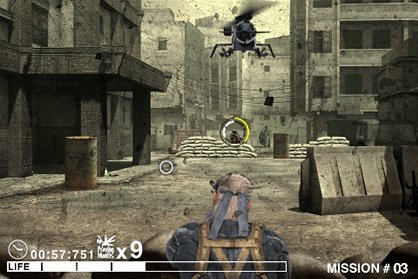 You play as Old Snake who just so happens to find something to crouch behind on every single stage from environments around MGS4. Touch the screen and he’ll pop up, move the reticule over an enemy and continue to tap to make him blast the enemy. A danger circle appears around the PMCs when it turns red it means they’re about to shoot. Lift your sweaty digit from the screen and he’ll duck into cover and avoid being plugged.

There’s a handy little sniper rifle at his disposal for enemies that are a way off in the distance. Pinch the screen and it’ll zoom in to your chosen target for you to line up a headshot. BOOM! It’s all pretty frantic at first but once you get used to zooming in and out and switching weapons you’ll soon be filling bodies with lead like an old fashioned gunslinger. 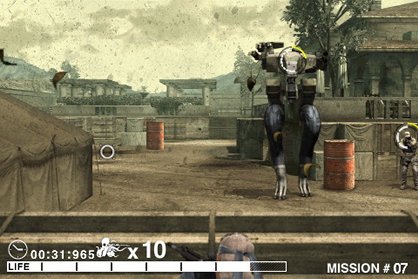 Along the way you come across recognisable foes from MGS4 like the Gekkos and the FROG unit that can leap onto walls and the like. The action, however, stays the same – tap the screen and kill stuff dead.

You’ll also see little frogs and ducks pop up too. Pop them and you’ll be rewarded with items such as a grenade launcher or hit enough of them for a high-score and you’ll unlock Metal Gear Solid wallpapers for your iPhone/Touch.