Nintendo 3DS eShop to launch on June 6 with internet browser and free Excite Bike, will finally give gamers the ability to download some titles straight to their system, but more importantly will give everyone a free copy of Excitebike, the NES classic, naturally re-mastered so that the 2-D side-scrolling racer will have a little bit of depth. The 3DS eShop would launch with a 3D-remastered version of the NES classic Excitebike as a free download and the 3DS Virtual Console will launch with Game Boy Advance classics Super Mario Land, Radar Mission and Alleyway………… 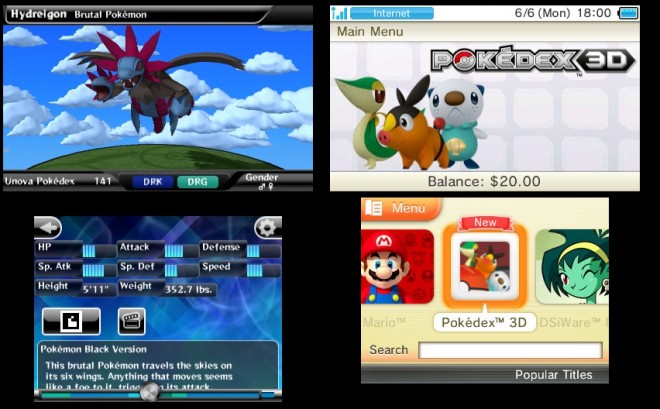 Nintendo of America has announced that the first major system update for the hand-held Nintendo 3DS system will be available in North America the evening of June 6, Pacific time. By installing the free update via a wireless broadband Internet connection, Nintendo 3DS users will have access to an Internet browser and the Nintendo eShop, which contains a variety of new content, including Pokédex 3D, an application that lets fans see Pokémon characters in 3D. To celebrate the grand opening of the Nintendo eShop, Nintendo is offering the NES game Excitebike re-mastered in 3D as a free download until July 7 for anyone who installs the system update. Upcoming Virtual Console content available in the Nintendo eShop includes Game Boy games Super Mario Land, Alleyway and Radar Mission. New content will be added to the Nintendo eShop on Thursdays. The Nintendo eShop is a digital store for Nintendo 3DS owners that provides access to a wide variety of downloadable content, such as original 3D software, classic games that have been re-mastered in 3D called 3D Classics, Game Boy and Game Boy Color Virtual Console games in their original 2D glory, and more than 350 Nintendo DSiWare games. Visitors can also view video game trailers, screen shots and product information for games, including those available at retail locations.

Within the Nintendo eShop, Nintendo 3DS users will also be able to download the free Pokédex 3D application and start collecting data for more than 150 Pokémon from the Pokémon Black Version and Pokémon White Version games. This new application lets users view each Pokémon in 3D with animated motion and sound. The Pokémon image can be rotated 360 degrees, allowing users to zoom in and view it from any angle. The detailed Pokédex also allows users to search, sort and filter all of the data they receive in a variety of ways, making it the essential guide for Pokémon fans. Players can complete their Pokédex by sharing data with friends and using the SpotPass feature, or by scanning special Pokémon AR Markers (augmented-reality markers). Once users have received data for a Pokémon, the AR Viewer allows them to view that Pokémon image in a real-world setting in real time, and create photos to share with friends. “The Nintendo 3DS system is constantly evolving and growing,” said Nintendo of America president and COO Reggie Fils-Aime. “The Nintendo eShop is a one-stop resource for a broad range of Nintendo information and downloadable games and applications. It expands the Nintendo 3DS experience with new and entertaining content.”

Other capabilities that go live with the system update include a free Internet browser that has the capability to show 3D images on sites specifically designed to show 3D images. The browser can also be used during game play. Users can stop their Nintendo 3DS game and go to the browser by pressing the Home button and then resume their game when they are finished browsing. The system update also gives Nintendo DSi and Nintendo DSi XL system owners the ability to easily transfer most of their previously downloaded Nintendo DSiWare games to their new Nintendo 3DS systems. In the near future, users will be able to download a free application for a short-form video service that will enable them to view specially selected video content, including 3D movie trailers, comedy clips and music videos automatically received when the SpotPass feature is activated. To install the recommended system update, Nintendo 3DS users can simply start the “System Settings” from the Home Menu, select “Other Settings” and scroll the page right to select “System Update.”