MadCatz and Sega are advertising with this Sonic the Hedgehog Figure Inductive Charger in celebration of Sonic’s 20th anniversary and limited edition charger for Wiimotes comes with sonic the hedgehog figurine……. 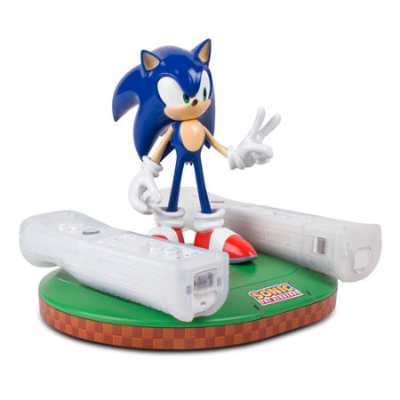 Mad Catz, the company behind a wide range of video game accessories has come up with a limited edition Sonic the Hedgehog Figure Inductive Charger.Well, apart from featuring a six inch tall Sonic, it also boasts a charge base for use with the Nintendo Wii video game system. For those who are more well versed with the rest of Mad Catz’s range of accessories, it will complement the officially licensed Sonic the Hedgehog video game accessory range and is revealed to the masses in time to celebrate Sonic’s 20th Anniversary. Since it is a limited edition release, each purchase is individually numbered, and might even end up as a highly-collectible method for storing and charging up to two Wii remote controllers.

Wii remotes will charge up silently atop a green plateau that represents the classic ‘Green Hill Zone’ which fans will definitely recognize and appreciate. The inclusion of built-in magnets will ensure controllers and battery packs are aligned in the most efficient charging position possible whenever the rechargeable NiMH battery packs rapidly energize themselves to deliver up to 15 hours of game play. Credit goes to an innovative electromagnetic induction technology used here, you can always juice up your Wii remotes without having to remove its protective protective silicone covers or Wii MotionPlus add-ons. The Sonic the Hedgehog Figure Inductive Charger by Mad Catz will retail for $49.99 a pop.