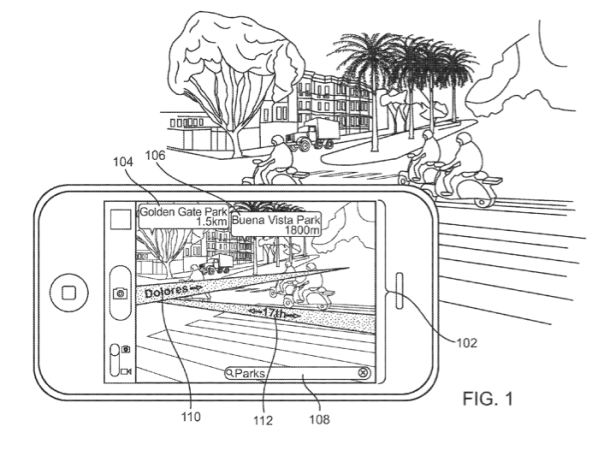 A new Apple patent application has surfaced, revealing that the company has some interesting plans ahead for its Map + Compass iOS feature and the patent application shows that future updates to the iOS Maps app could incorporate the use of the iPhone’s camera and its various sensors to provide mapping data to visually augment live video and images. While there are plenty of augmented reality apps that highlight nearby points of interest overlaid over live video feed, this feature is still non-existent in iOS Maps app. But a number of mapping-related patents and quiet acquisitions of startups focused on mapping tech indicate that Apple has been quietly working on taking the mapping experience on iOS devices to the next level. Simply titled Augmented Reality Maps, it describes a next-generation mapping app for iOS devices that augments live video feed of your surroundings with various points of interest overlays based on your geographic position, camera direction, tilt of the device and even based on a landmark:

Apple’s solution would provide really interesting data, including street names, and would be clever enough to issue warnings when a user is heading in the wrong direction when navigating. “In some instances, street signs may be missing or indecipherable, making it difficult for the user to find the directed route”, the company argues, adding:

In one form of interaction, a device can receive input from the user requesting directions from a present location to a selected search result. Directions can be overlaid onto the presently displayed video feed, thus showing a course and upcoming turns

Patently Apple has more information on the filing. Apple credits engineer Jaron Waldman with coming up with this invention, available in full detail by typing in a document ID of 20110199479 into the USPTO search engine. The same person was also credited in the recent Schematic Maps patent application describing how a mobile device could dynamically detail important points of interest. Apple also adds 3D printer video with this new patent, chech the video below: