Wall Street Journal have reported that a Chinese carrier named China Telecom has managed to unlock the CDMA based Verizon iPhone to run on their CDMA network. The article seems a little confused as to the differences between a jailbreak or unlock. 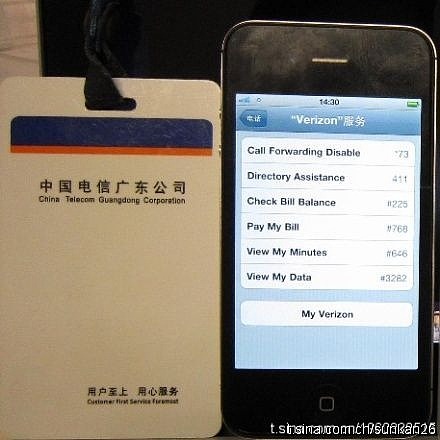 A screen shot from a Sina Weibo account registered to the Guangzhou branch of China Telecom shows an image of what appears to be a Verizon Wireless iPhone4 next to a Guangzhou China Telecom employee badge. The Chinese text above reads: “CDMA iphone4 registered, for the first time we invite everyone to feast their eyes!!!”

The only way for a CDMA iPhone 4 to make a call on another network would be if the device had been unlocked, freeing the iPhone from its carrier shackles. WSJ then references a picture of the CDMA iPhone 4 with a Cydia app on the homescreen, but that’s not much evidence considering the Verizon iPhone can be jailbroken using either GreenPois0n RC or PwnageTool 4.2.

Those familiar with developing iPhone unlocks have long stated that the CDMA iPhone presents a unique challenge because moving a CDMA device to another network typically requires that new networks assistance in order to activate the phone. This simple fact is also what makes this news from China Telecom most compelling, as it suggests the unlock is being developed directly by the carrier themselves, which would ensure carrier compatibility from the get-go. If China Telecom manages to pull this off, it could represent a blueprint for other CDMA carriers to follow that would allow them to unofficially offer the iPhone 4 on their networks too.

Update Cydia In Background On iPhone, iPad & iPod touch[How To]

How To Scan QR Codes With Any Smartphone [Android + Apple]