Toshiba Qosmio T851 can do simultaneous 2D and glasses-free 3D, arriving in Japan this July and you will be able to view content in differing dimensions in neighboring windows.Toshiba T851/D8CR features a 15.6-inch (1920 x 1080) Clear SuperView LED-backlit display and makes use of distinctive 3D Window technology which enables 3D and 2D content to be showcased at the same time……….. 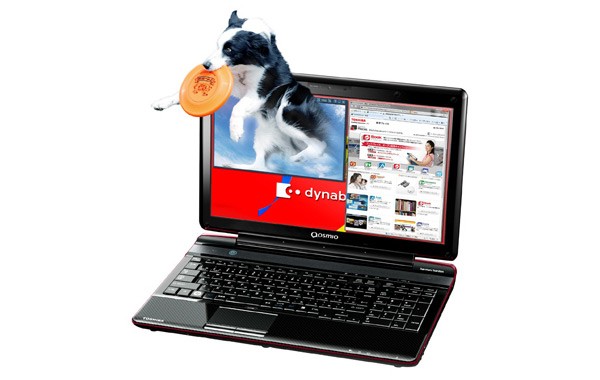 Toshiba Corporation unveiled dynabook Qosmio T851/D8CR, he world’s first glasses-free 3D notebook PC able to display 3D and 2D content at the same time on one screen. The new PC will be available in the Japanese market from late July.dynabook Qosmio T851/D8CR employs Toshiba’s distinctive 3D Window technology to realize the world’s first glasses-free 3D portable PC able to simultaneously display 3D and 2D content in separate windows in a single screen. Users can watch high-quality 3D images or enjoy 3D games in one window without any need for wearing dedicated glasses or installing a dedicated panel over the display, while at the same time working, browsing the internet or sending e-mail in another window.3D images are created using parallax, by delivering separate images to the left and right eyes. User can enjoy high-quality 3D images without dedicated glasses if the separate images are properly delivered to each eye. Toshiba has adopted a distinctive face-tracking function and Active Lens to fulfill this requirement. 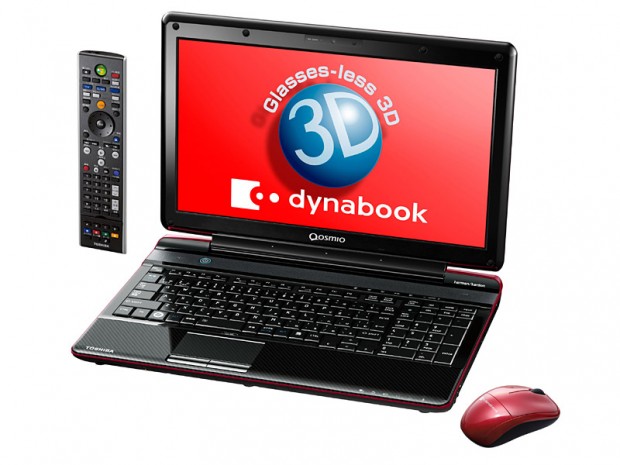 Face-tracking allows the web camera integrated into the dynabook Qosmio T851/D8CR to track the user’s face and recognize the position of the eyes. Active Lens, integrated into the LED panel, controls polarization of light delivered from the panel. These functions secure precise delivery of separate images to each eye, even when the user moves.With SpursEngine, a dedicated image processor with advanced performance derived from the multi-core technology of the Cell Broadband Engine, dynabook Qosmio T851/D8CR boasts 2D to 3D real-time conversion technology that allows users to enjoy high-quality 3D images[2] generated from 2D terrestrial, BS and 110 CS digital broadcasts.These 3D images are made all the more natural and eye-friendly by Toshiba’s newly introduced Face3D and Caption stabilizer. Face3D uses Toshiba’s distinctive high-speed, high-accuracy face detection technology to locate faces in 2D images and then applies a human depth template to the image, giving the features more depth and assuring a 3D appearance with graded shading. “Caption stabilizer” detects any captions in the image and keeps it constantly at the front of the image. The depth of the captions stays fixed and easy to read.3D Window is realized by the Active Lens, which controls polarization of the light delivered from the LED panel. With Active Lens turned off, the panel delivers normal 2D image with it turned on, the panel delivers 3D images, separating the images sent to each eye. Active Lens can be turned off and on quickly and locally, which means individual parts of the LED panel can deliver 3D images. Thus the user can enjoy 3D Window and 2D images shown simultaneously on one display.