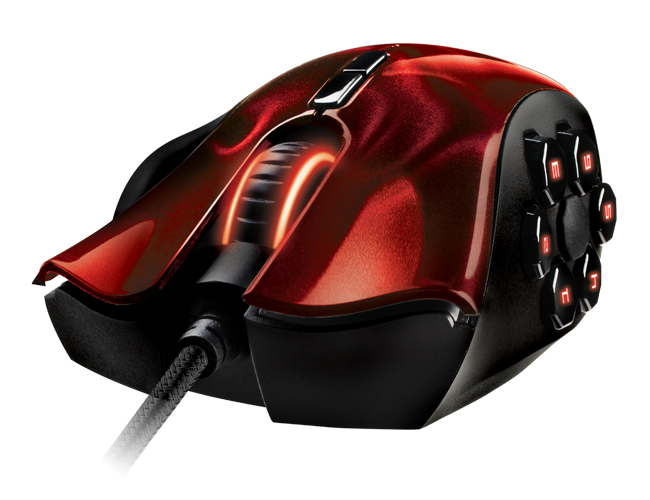 Carlsbad, Calif. – 1st May, 2012 – Razer, the world leader in high performance gaming hardware, is excited to launch the Razer Naga Hex Wraith Red edition gaming mouse. The best weapon to cut down hordes of monsters crawling out from the depths of evil is now available to gamers in an all-new blood red color.

Made especially for hack n’ slash, MOBA and Action RPG games, the Razer Naga Hex Wraith Red edition sports the same devastating 6 mechanical side buttons as the original Razer Naga Hex. Bind a hotbar of skills or inventory items to rapidly unleash hell on boss runs and maintain effective crowd control as enemies attack from all sides. Having the 6 crucial commands so close to your thumb allows for rapid actuations and enemies dead faster than they can react.

The Razer Naga Hex’s mechanical buttons are also highly durable and responsive, capable of registering up to a staggering 250 clicks per minute – perfect for the frantic hyper-clicking of hack ‘n’ slash RPGs.

The Razer Naga Hex Wraith Red edition is available alongside the original Green edition and either will be your perfect companion for hack n’ slash victory.

The Razer Naga Hex is perfectly suited for pro-gamers and fans of the MOBA/action-RPG game genres. It is primed with six mechanical thumb buttons for the exact number of controls necessary to suit the user interfaces of those games. Bind your skill-bar or inventory grid to the six buttons for faster, more comfortably efficient access to your full range of powers as you take the competition down.