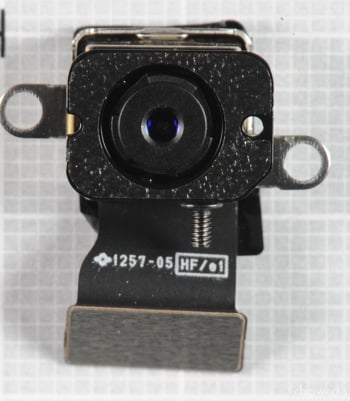 We reported earlier that iFixit has torn down the entire new iPad to its very core to reveal its intricate details. While we did report a lot of technical details divulged by the folks at iFixit, it has now been revealed by Chipworks that the new iPad, despite using a better camera, utilizes the same camera sensor which was used in iPhone 4. This essentially means that the 5-megapixel camera in the new iPad is using the same CMOS Image sensor that was used earlier in iPhone 4. According to the Chipworks fellas, ‘That unit was the Omnivision OV5650. The OV5650 is the second generation back illumination (BI) technology from OmniVision. This 5 Mega Pixel camera features 1.75 µm pixels, and is designed to deliver DSC quality in a mobile phone application. The sensor supports HD (1080p) video at 60 fps. Apple specifications for the new iPad also tout the same specification. So the analysis we have just completed… drum roll please… says that the 5 Mp back illuminated CMOS Image Sensor in the new iPad is the same, it is the Omnivision OV5650 (die mark OV290BF).’

Apple has, in the past too, recycled old parts into new products and that is an excellent strategy. It helps keep the costs to a bare minimum while at the same time, letting Apple afford minimum risks in a new product.

The image sensor mentioned above is not the only thing in the new iPad that comes from older devices. The front camera in the new iPad is 0.3-megapixel Ominvision unit. And it is the same camera which was used in iPad 2 as well as the old iPod Nano.

Another interesting revelation from the new iPad tear down is that Apple is apparently getting the DRAM for the new iPad from two sources, namely Samsung and Elpida.

OpenPeak Showed Off Its 10-inch OpenTablet at CES 2011