Asahi’s new slim glass substrate for touchscreen displays gives smartphones svelte silhouettes and the company will start volume production and sales of the glass in late April 2011, targeting at smartphones and tablet computers.This new 0.28mm soda-lime glass is 15% thinner than the company’s existing offerings and the skinny new substrate will strut its stuff at SID next month…….. 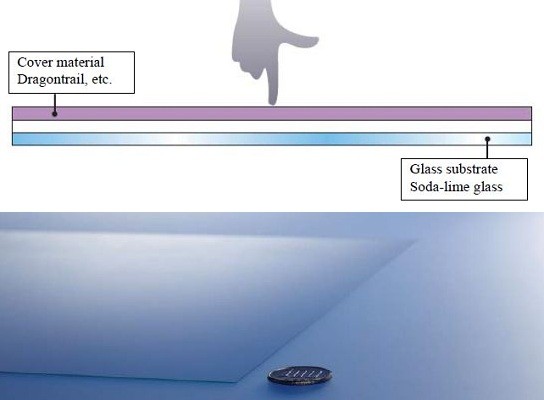 AGC announced it has developed the world’s thinnest soda-lime glass substrate for touchscreens, measuring just 0.28 mm, or 15% less than the currently thinnest commercial substrate at 0.33 mm, as well as being 15% lighter, promising to further shrink smartphones and tablets in the near future. Starting with mass production using the float process later this month, AGC expects annual sales to exceed 10 billion yen (about 120 million USD) in 2013.Glass touchscreens in smartphones and tablets comprise a tough cover material and an underlying layer of substrate material embedded with electrodes. Soda-lime glass is an ideal substrate material for touchscreens because it maintains form when subjected to heat, resists discoloring due to ultraviolet radiation, accepts chemical strengthening and is easily processed.AGC, under its Grow Beyond strategy, is building new foundations for growth through innovative solutions for specialty glass used in displays, including Dragontrail, a damage-resistant cover glass launched in January this year. AGC forecasts sales of its various, new electronics-related products, including its newly announced soda-lime glass substrate and other specialty glass for displays, to exceed 100 billion yen (about 1.2 billion USD) in 2013.AGC‘s soda-lime glass substrate is scheduled to be exhibited during Display Week 2011 of the Society for Information Display (SID) in Los Angeles, California, from May 15.

Panasonic Made World’s Largest 4K Display, Fit At A…

Record Number Of Phones And Tablets Activated On Christmas Day