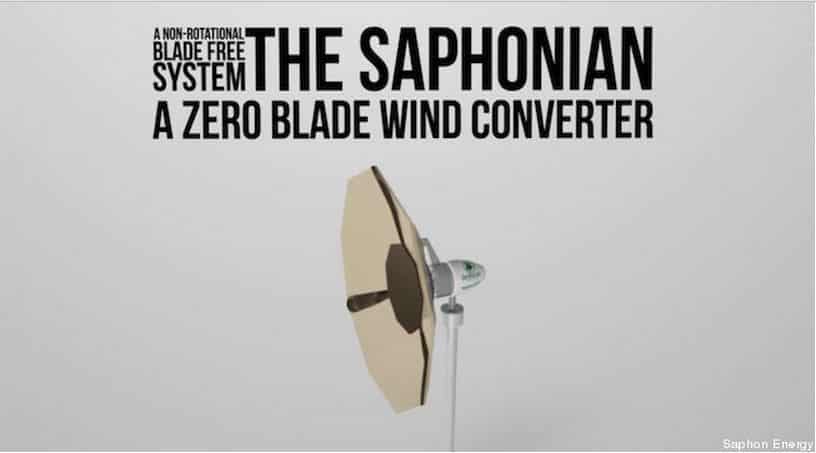 We have seen many high-tech wind turbines earlier that are considered as one of the main sources of sustainable energy. It’s sad but true that, the rotation of the blades of wind turbines often kill birds. Added to that, the noise and vibration of the wind turbines cause headaches, nausea and insomnia among people living nearby; even scramble radio and TV signals. But, this things may end with a revolutionary design from a Tunisian company, Saphon Energy. Saphon has come up with a non-rotational blade free wind power generation system, called The Saphonian. Saphon Energy was founded in 2009 by a Tunisian banker, Hassine Labaied, and his friend Anis Aouin. The duo teamed up to create a new type of wind energy harvester that doesn’t rely on blades, or moving parts or likes. Inspired by sailboats, the Saphon Energy came up with a new solution rather than improving the current wind turbines’ technology. That’s how The Saphonian came. With the The Saphonian the kinetic energy of the wind can be converted and stored easily into electrical form. The conversion technology is vastly different compared to traditional wind turbines’ wind conversion technology.

The Saphonian system is twice as efficient as conventional wind turbine. And, it’s 45% cheaper to manufacture. As, The Saphonian is silent, so there’ll be no noise, headaches, nausea or insomnia. In addition, birds can fly safely.

You will get more information about this innovative zero-blade wind turbine at Saphon Energy.

Aegis Parka – A Pollution Resistant Jacket For You