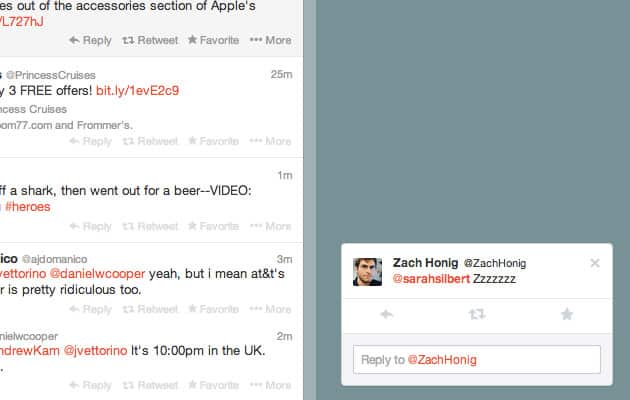 If you are an avid user of Twitter on the web, you may be in for a new feature soon. The micro-blogging service is apparently testing pop-up notifications on the web version. Typically, when Twitter tests out a new feature, it selects a limited group of individuals who can see and use the feature. Based on the feedback from these few people, and some other factors, Twitter decides whether or not it is suitable to go forth with the full roll-out of the feature.

Using this typical Twitter timeline for new features, it would appear that the company is tinkering with the possibility of pop-up notifications. So far, the feature has ‘popped up’ only on the web version of the service.

This is how it works: whenever someone replies to your tweet or otherwise mentions you on Twitter, you get a pop-up notification in the space on the right-side of the page. You can reply to the tweet or interact with it right from the pop-up window. For now, the feature is visible only to a few users.

It does sound convenient, although it remains to be seen if it would turn the rather neat web look of Twitter into a clutter-filled pop-ups all over the page. Nonetheless, since the feature it still in testing for now, we can rest assured that if things ever come down to a full launch, Twitter would have significantly improved it.

6 Things Programmers Must Do To Get Hired During The Recession

Snapchat Hacked! Millions Of User Contents Are Circulating Around The Web!