The publication of confidential US diplomatic cables by Wikileaks has been criticised by governments including Britain, America and Pakistan – the White House described it as “reckless”.The documents show some Arab leaders – including Saudi Arabia’s King Abdullah – urging the US to attack Iran and end its nuclear weapons programme. 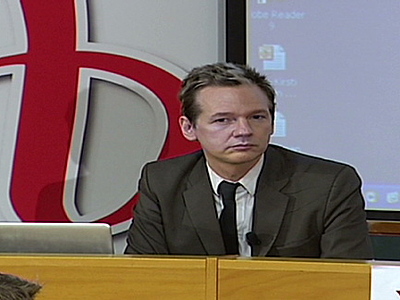 This Year’s National Christmas Tree Will Be The…

Amazon, after coming under fire for hosting WikiLeaks, booted it from its servers on Wednesday, prompting the whistleblower website to shift to Web-hosting services in Europe.

WikiLeaks, in a message on its Twitter feed @wikileaks, said: “WikiLeaks servers at Amazon ousted. Free speech the land of the free – fine our dollars are now spent to employ people in Europe.”

The WikiLeaks website was sluggish and periodically unavailable on Wednesday but it was not immediately clear if this was due to its hosting issues or if it had again come under cyberattack as in previous days.

Lieberman said Amazon’s decision to cut off WikiLeaks “is the right decision and should set the standard for other companies WikiLeaks is using to distribute its illegally seized material.”

WikiLeaks on Sunday began publishing the first batch of more than 250,000 US diplomatic cables the website is believed to have obtained from a disaffected US soldier.

Amazon is a major provider of Web-hosting services, renting out space on its computer servers to customers around the world. It has not responded to repeated requests from AFP for confirmation that it was hosting WikiLeaks.

But Jon Karlung, chairman of the Swedish firm Bahnhof, which also hosts some WikiLeaks documents, said Tuesday that the WikiLeaks website featuring the US diplomatic cables was being primarily hosted by the Seattle-based Amazon.

Lieberman urged any other company hosting WikiLeaks to “immediately terminate its relationship with them.”

The global police agency Interpol has issued a global wanted notice for WikiLeaks founder Julian Assange on suspicion of rape, on the basis of a Swedish arrest warrant. Assange, a 39-year-old Australian believed to be in hiding in Europe, has denied the charges.

WikiLeaks said Sunday and again on Monday that it was the target of distributed denial of service, or DDoS, attacks aimed at shutting down or slowing the website.

On Monday, a computer hacker known as the “Jester” claimed responsibility for temporarily taking down the WikiLeaks website on Sunday.

Mikko Hypponen, chief research officer at computer security firm F-Secure, told AFP he believed the “Jester,” who has targeted Islamic jihadist websites in the past, had the ability to carry out the attack on WikiLeaks.

The leaked cables written by US diplomats posted overseas contain blunt appraisals of their host governments, and unflattering pen portraits of world leaders.

President Nicolas Sarkozy of France is said to be thin-skinned and authoritarian, while German Chancellor Angela Merkel is described as risk-averse.

Afghan President Hamid Karzai is referred to as “extremely weak” and susceptible to conspiracy theories.

One US diplomat was said to be shocked at the “rude behaviour” of the British queen’s second son, Prince Andrew, when abroad.

Meanwhile, Colonel Muammar Gaddafi of Libya always travels with a “voluptuous blonde” Ukrainian nurse, according to one of the cables.

Concerns aired include the security of Pakistani nuclear material that could fall into the wrong hands, allowing militants to make an atomic weapon. The widespread use of computer hacking by China’s government is also reported.

Other issues reportedly covered in the cables are:

* Iranian attempts to adapt North Korean rockets for use as long-range missiles
* Corruption in Afghanistan with concerns heightened when a senior official was found to be carrying more than $52m (£33m) in cash on a foreign trip
* Bargaining to empty the Guantanamo Bay prison camp – including Slovenian diplomats being told to take in a freed prisoner to secure a meeting with President Barack Obama
* Germany being warned in 2007 not to enforce arrest warrants for CIA officers involved in an operation in which an innocent German citizen with the same name as a suspected militant was abducted and held in Afghanistan
* US officials being instructed to spy on the UN leadership by Secretary of State Hillary Clinton
* Alleged links between the Russian government and organised crime, with intelligence agencies using underworld bosses to carry out operations
* Yemen’s president talking to General David Petraeus (while he was responsible for US military operations in Central Asia and the Middle East as head of US Central Command) about attacks on Yemeni al-Qaeda bases and saying: “We’ll continue saying the bombs are ours, not yours”
* Faltering US attempts to prevent Syria from supplying arms to Hezbollah in Lebanon