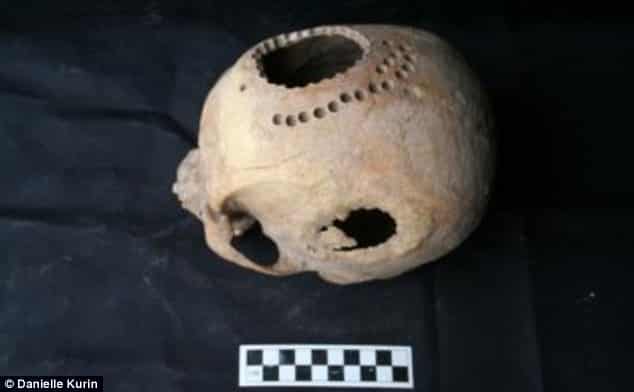 Trepanning, also known as trephination, trephining or making a burr hole, is a surgical intervention in which a hole is drilled or scraped into the human skull, exposing the dura mater to treat health problems related to intracranial diseases. Lately, by excavating burial caves in the south-central Andean province of Andahuaylas in Peru and examining 1,000-year-old skulls, bioarchaeologists from the University of California have said that around in between AD 1000 to 1250, trepanning was used to treat everything – from head injuries to a broken heart.

Danielle Kurin, an assistant professor in the Department of Anthropology at UC Santa Barbera and a specialist in forensic anthropology, along with her research team unearthed the remains of 32 individuals. These remaining human bodies were around thousand-year-old, indicating late intermediate period (AD 1000-1250). However, by examining the skulls researchers found that during that late intermediate period (AD 1000-1250), without the benefits of a sterile operating theater, state-of-the-art surgical instruments, anesthetic and pain medication, only male people of the South American country used to undertake a surgical procedure with a trephine (an instrument used for cutting out a round piece of skull bone) that involves removing a section of the skull using a hand drill or a scraping tool. This practice is called trepanation. Kurin said, “When you get a knock on the head that causes your brain to swell dangerously, or you have some kind of neurological, spiritual or psychosomatic illness, drilling a hole in the head becomes a reasonable thing to do. It looks like they were trying different techniques, the same way we might try new medical procedures today. They’re experimenting with different ways of cutting into the skull.”

Kurin and her team found that people of late intermediate period used to treat everything – from head injuries to a broken heart – through trepanning. Sometimes such treatments went successful and the patient recovered, while sometimes things didn’t go so well. Researchers assume, when a patient didn’t survive, his skull might have been donated to science, so to speak, and used for education purposes. In addition, researchers also found some cave paintings, indicating that people used to believe such practice would cure epileptic seizures, headaches and mental disorders.

Finally Kurin said, ‘These ancient people can’t speak to us directly, but they do give us information that allows us to reconstruct some aspect of their lives and their deaths and even what happened after they died. Importantly, we shouldn’t look at a state of collapse as the beginning of a “dark age”, but rather view it as an era that breeds resilience and foments stunning innovation within the population.”