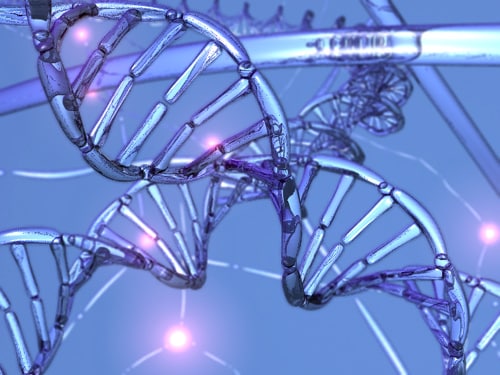 Scientists are finding success recently in getting DNA to mimic non-biological circuits and form logic gates, the stuff from which all computers are made. DNA-based logic gates that could some day carry out calculations inside our bodies and can be programmed to target diseases as they arise. “The biocomputer would sense biomarkers and immediately react by releasing counter-agents for the disease,” says Itamar Willner of the Hebrew University of Jerusalem, Israel, who led the work. The new logic gates are formed from short strands of DNA and their complementary strands, which in conjunction with some simple molecular machinery mimic their electronic equivalent. Two strands act as the input: each represents a 1 when present or a 0 when absent. The response to their presence or absence represents the output, which can also be a 1 or 0.

Take the “exclusive OR” or XOR logic gate. It produces an output when either of the two inputs is present but not when both are present or both are absent. To put the DNA version to the test, Willner and his team added molecules to both the complementary strands that caused them to fluoresce when each was present in isolation, representing a logical 1 as the output. But when both were present, the complementary strands combined and quenched the fluorescence, representing a 0 output.

One of DNA computing’s advantages is that it allows calculations to be carried out in parallel, if different types of logic gates are represented by different ingredients. The team tested this process by tossing the XOR ingredients into a test tube, along with those for two other gates, to produce the first few steps involved in binary addition and subtraction.

The team was also able to create logic gates that calculate in sequence. The trick here is to make the output from the first gate a new DNA string that can be used as the input for a second gate and so on. Such “cascading gates” allow for more complex calculations: the entire set of steps required for addition and subtraction, for example, or to deliver a multi-step drug treatment.

Previous DNA-based computers tended to slow down at each step as the DNA strands were used only once, and so became depleted with time. One significant advance claimed by Willner and his team is that their DNA strands reform after each step, allowing long sequences of calculations to be carried out easily for the first time.

Even a single logic gate could have useful medical applications, Willner says. His group built and tested a gate designed to reduce the activity of the blood-clotting enzyme thrombin, which can lead to brain damage following a head injury. The gate acts as a switch that is triggered by the presence of thrombin. Part of the gate consists of a DNA strand connected to a molecule that binds to thrombin. If thrombin is present, this molecule is released, otherwise it stays bound and inert. Such a smart drug could be injected into the bloodstream in advance and would only switch on when needed (Nature Nanotechnology, DOI: 10.1038/nnano.2010.88).

Another problem with earlier DNA computers is that they use enzymes to manipulate the DNA, and so function only in certain chemical environments that cannot easily be reproduced inside the body. Willner’s team use DNA-like molecules to do this job.

“Being enzyme-free, it has potential in future diagnostic and medical applications,” says Benny Gil of the Weizmann Institute of Science in Rehovot, Israel. He is impressed with the new gate system but recognises that it will take years of research and development to bring “smart drugs” to medicine.

Mars Used To Be Covered By A Massive Ocean