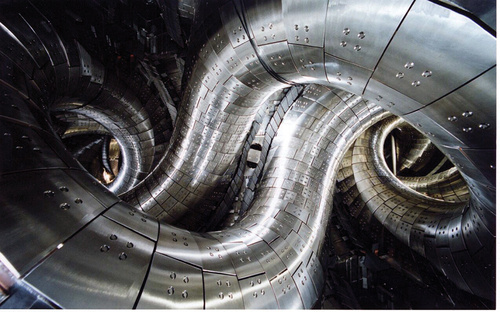 Want to travel into the future of particle physics, but don’t have that Higgs boson-powered time machine in working order yet? Check out this chart (below), which shows the insanely huge physics experiments that come after the Large Hadron Collider.

Laws Of Nature May Not Be The Same Everywhere. Revolution In… 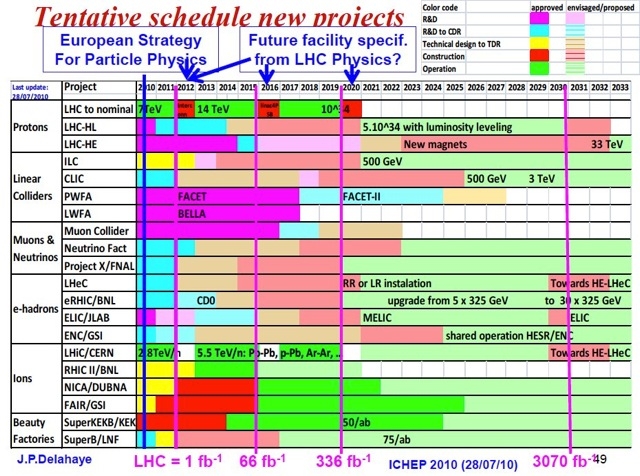 After six days of talks and discussions and an estimated 10,000 slides shown at the International Conference on High Energy Physics, a few slides stand out as likely to stick around for a while. The Higgs exclusion limits from CDF and DZero, the first top quark candidates from the Large Hadron Collider and the discrepancy in neutrino and antineutrino numbers will probably pop up again in many talks in coming years. The next years will also be the time when committees and funding agencies have to make decisions on what comes after the LHC, and they’ll be grateful to Jean-Pierre Delahaye for another slide that stands out. It is probably the first slide ever that lists all possible future projects in high-energy physics around the world along with their states of readiness, assembled especially for the last-but-one talk at ICHEP. Jean-Pierre’s future is everything from pink to bright green – pink meaning a project in an R&D phase, blue a project on its way to conceptual design, yellow a project on its way to technical design, red under construction and green projects under operation. The projects are also classified by kind, so accelerators with similar physics goals are grouped together, with proton accelerators, linear colliders or B factories all on top of each other for easier overview. 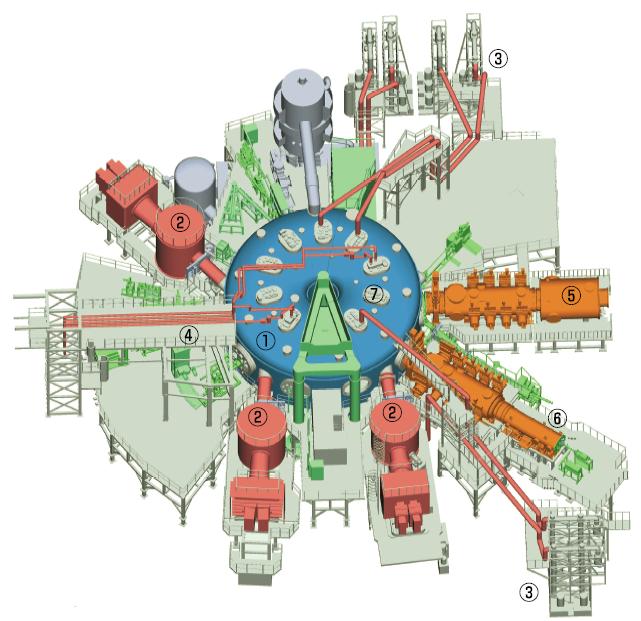 The first results from the LHC are only just rolling onto the presentation screens and people are already thinking about the next project.  They have to – a new project can take up to 40 years from first idea to project approval, as Delahaye shows in his talk. Not too long ago this took not much more than five years. With projects becoming ever bigger and more challenging, new technologies that promise to enhance the performance and reduce the price at the same time are worth some thorough investigation. Maybe the next machine does not actually have to be bigger. What if there are acceleration techniques that could get the  length of a linear collider down from several tens of kilometers to just a few hundred meters? Or even a few centimeters? Take for example the accelerating gradient in a laser-driven dielectric linear accelerator, which is predicted to be around 1000 Megavolts per meter. This is a completely different league from a project like the ILC, whose accelerating gradient is set at 31.5 Megavolts per meter. But the International Linear Collider could in principle be built tomorrow, whereas R&D for dielectric acceleration will have to go on for  many years before its developers can press the “Go” button. 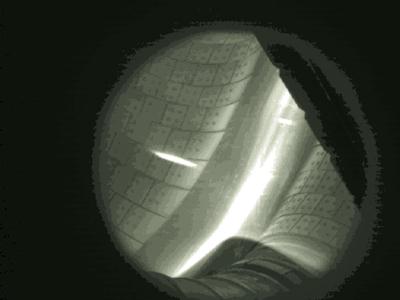 So what are the accelerators of the future? How and when will we know which one will get built? It’s the job of a variety of different committees, task forces and strategy groups to analyze, discuss and make recommendations. It’s the job of funding agencies and governments to take decisions based on these recommendations, or “road maps”. With first LHC results rolling in and discoveries in the palpable future, road-map makers around the world are getting ready to write new editions of their maps. In Europe, the CERN Council Strategy Group will start a new round of meetings that kicks off in March 2011. A year later, the highlight of the process will be an open community meeting where all particle physicists (not only from Europe) can voice their visions fir the future of the field. The new edition of the roadmap is due in September 2012. Japan’s current master plan for large-scale projects (with projects such as SuperKEKB, the JPARC upgrade, the ILC and a large neutrino detector tops on the list) will also be updated by 2012, and in the United States, the long-range planning exercise by the Particle Physics Project Prioritization Panel completed in 2008 will be updated depending on LHC results, probably also around 2012.

For The First Time, Scientists Take Photographs Of Electrons Moving Inside Atoms

How To Build A Time Machine